Christmas in Key Largo, Florida--palm trees, bright blue waters, tropical temperatures and two people feeling the sting of a bad break-up. When Tom McCoy fled there to forget his latest romantic debacle, the last person he expected to meet was beautiful Brooke Devlin, who is trying to heal from a mishap of her own. Their mutual attraction is strong, but is it real or just rebound? Will their holiday affair last beyond checkout time, or become the stuff Spring breaks are made of? 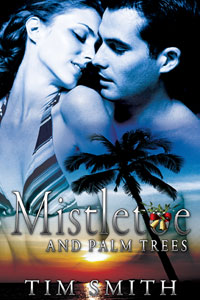 Brooke dropped her beach bag on the floor, wrapped her arms around Tom's shoulders and pulled his face to hers. Tom put his hands on her back and kissed her, sliding his tongue in and out of her mouth in a steady rhythm. His hardening cock strained against his wet swimming trunks. Brooke pressed her midsection against him, moving slowly, increasing his arousal. Tom ran his hands down her back until he reached her butt. He gave her cheeks a firm squeeze with both hands and gasped when he felt Brooke's hand inside his trunks, massaging him to complete hardness. He kissed her with more heat while she fondled him.

Tom hadn't been this turned on in a long time as he rocked against her, enjoying her smooth touch. He pulled his lips from hers and placed them on her neck, nibbling her ear before kissing a trail down to her breasts. He took the end of the knotted string between her breasts with his teeth and tugged on it until her top popped open. He flicked his tongue over one breast then moved to the other, lovingly sucking her nipples into hardness. Brooke gasped and dug her fingers into his hair the longer he sucked and teased. Tom knelt on his knees and peeled her wet bikini bottom down, exposing what she had to offer. He moved so he could mouth her and flicked his tongue along her outer folds. Brooke helped him by stepping out of her bikini and standing with her feet apart to allow him access. He licked and teased for a few minutes, tasting her sweet musky arousal.

Brooke pulled him to his feet. Tom slipped off his trunks and saw Brooke's wide-eyed look of surprise when she saw his cock standing at full attention, jutting in front of him. She dropped to her knees and took him into her mouth. She slowly sucked him, working him further into her mouth. When she had half of him in, she began to gag then stopped sucking while stroking him with her hot palm. "I can't take you all the way.