Mistress to Slave by Morwenna Drake

They knew how to treat a lady in Imperial Rome, and Quintus the slave lives to obey. But tonight is Saturnalia, when the masters and servants exchange roles for the night, and his mistress, Atia, loves the old traditions.

When the new girl tries to tell the boss how to run his business, his first reaction is fury and scorn. What does she know about the exercise bike business? A few easy modifications later, it turns out she knows a lot. And not only about bikes.

The Pleasure Fixer by Candy Bagham

Abi makes life easier for the A-List celebs who want to party, Gina makes sure they have enough to eat. Together alone they’re dynamite, but when Biggy Bardino gets in between them, they really hit the big time.

When a camping holiday is disrupted by a troupe of troublesome teens, Adrian thinks the best cure is to tell the guy who runs the place. Mirabelle, on the other hand, reckons they simply need to blow off some steam. 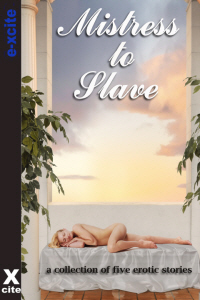 As she leaned into his massage, Atia could feel his dense calf muscles beneath her head, the rough fabric of his tunic brushing against her cheek. She thought how drastically different it was to the smooth silk of Marcus’s fine togas. Quintus’s movements were smooth and his fingers were agile, finding hidden knots of tension in her shoulders.
‘I noticed you seemed a little … disconcerted when I came across you and Gaius Marcus earlier,’ commented Quintus, the amusement in his voice evident. ‘Were Marcus’s attentions unpleasant to you?’ Atia tried to remain calm and relaxed, although anger flared within her at his impertinent question
‘I do not think that is any of your business,’ she replied. Atia was painfully aware that it was almost impossible to carry off an indignant attitude when she was lying naked and oiled before him.
‘My mistress’s pleasure is one of my main concerns,’ said Quintus in a low voice. As he spoke, his hands moved away from Atia’s shoulders and slipped down to encircle her breasts. Atia drew in a sharp breath to protest, yet no words came. Just as Marcus’s had done, Quintus’s thumb and forefinger began to tweak and twist Atia’s nipples. The oil on his hands heightened the sensation as Quintus squeezed the globes of both her breasts. Atia squirmed beneath his touch, sending ripples across the water to crash against the side of the bath.
‘So this is to my mistress’ pleasure, then?’ asked Quintus. ‘Or would she prefer it if I concentrated elsewhere..?’ With his left hand still cupping her breast, Quintus’s right hand began to slip downwards over Atia’s chest and belly, and Atia raised her hips to meet his touch. Quintus’s fingers curled for a moment in her most intimate hairs then descended lower to circle around her clitoris.
Atia gasped at his touch, moaning with pleasure as his fingers found the entrance to her sex and slipped inside. Atia was positively writhing beneath his hands now, but Quintus suddenly withdrew his hands and sat back on his heels. Atia turned to glare at him in shock and frustration and Quintus gave her an apologetic smile.
‘I hear the bell, mistress,’ he said, getting up and adjusting his tunic, ‘I must go and oversee the preparations.’ The wicked smile he threw over his shoulder as he left told Atia that his departure was not as reluctant as he had intimated. Atia slapped the surface of the water in anger at being teased and unsatisfied for the second time that day. Yet the outburst did nothing for her frustration except to send bathwater pooling across the floor.