Even if she is pushing forty, confirmed bachelorette, Pamela Lane, is not interested in a husband and kids. She’s already got more than she can handle taking care of the models contracted with Lane V Modeling Agency, as well as some of their overreaching parents.

When she finds new model Alicia who’s destined for fashion greatness, of course she expects the minor to come with an over-protective father, but who knew he would look so good? 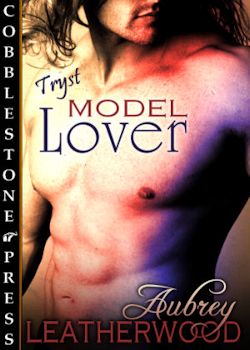 “Your kids are not my kids…” graced the front of the oversized white T-shirt and “I don’t love ’em like you do” the back.

Pam Lane wore her single favorite article of clothing over black sweatpants and sneakers. Her usually pristine bob had been hastily pushed back with a tortoiseshell headband. Friday afternoons were always open call and drew tons of people. While Valeria Valvo, her partner, wore a professional and fashionable black suit, she chose to wear this shirt to keep overreaching mamas and papas at arm’s length.

Foot tapping impatiently, arms crossed over her chest, she tried to keep her mouth shut as Sherrod, one of her in-house photographers, silently snapped frame after frame of their potential client. The clicking of the shutter and hushed voices served as the only background music while the model posed for the camera.

Every time Pam raised a finger to make a suggestion, he clucked his tongue, which forced her to remain still and patient. Patience had never been one of Pam’s virtues. The drive to direct and mold a new model tested her mettle, especially when that new model was an absolute diamond. The young woman oozed raw talent, which kept triggering Pam’s need to say something. Tilt your chin down a little, sweetie. Flex your fingers slightly. Find the light. That is a perfect example of what a beauty shot should be. He didn’t even allow her to compliment the young lady when she was doing well.

Sherrod had the right of it, of course. They liked to get a feel for a model’s raw talent before contracting her. Letting a girl take control of the first session without aid of music, scene, or direction exposed all. Frame after frame, this model posed like a pro. Already, on a purely physical level, the young woman had the power to steal one’s breath. But as she flirted with the camera, every eye in the room was on her. Stylists clumped in corners nodding and whispering to each other that Alicia was pure devastation. Devastation was synonymous with beauty at Lane V Modeling Agency.

The hair already made her a standout, thick coarse waves erupting from her head and down her back like a wolf’s mane. Wild, it looked, and at fascinating odds with the poise of her sculpted but not overly full pink lips, patrician nose, and startling, startling crystal blue eyes. Where in the hell had the girl gotten true to life, honest-to-goodness blue eyes? Eyes closed, she could have been any ethnicity, black, Latin, Middle Eastern, even Asian. Deliciously perfect, her skin matched the color of a hot latte. Creamy but with a caramel undertone. Gorgeous. Eyes open? An English rose kissed long by the sun. Magnificent.

In a room filled with stunning models, she drew undivided attention. For that reason alone, Pam knew she would sign her. A look like that didn’t come along every day. If she didn’t sign her, someone else would, potentially someone who would not look out for the girl the way Lane V Modeling Agency would. For all her beauty and sensuality, the girl looked young, fragile, like someone could take advantage of her with ease. That thought, Pam could not abide.

After raising two younger siblings pretty much on her own after her parents died, she was tired, and she had no desire to have children. Too much stress, too much drama, too much lip, too much money, too much fear and worry. When Rasheedah and Patrick had finally finished school and landed jobs, she’d washed her hands of the idea of ever having her own kids. Unfortunately, the universe had had the final say in the matter. Lane V employed the largest population of models under the age of eighteen, which meant that Pam had dozens of kids…and apparently she was about to adopt another one.

As she reached for the clipboard clutched to her partner’s chest, Valeria smacked her on the back of the hand. “Her name is Alicia. That’s all you need to know.”

When Pam told her team to help control her workaholism, they’d gone a little too far. “You know this is having a reverse affect on my stress level.”

Pam sorely wanted to say something about Valeria’s cat-that-ate-the-canary smile, but she felt her cell phone vibrate in her pocket. She took it out and looked down at the screen.

“Did you just sigh?” Valeria arched an eyebrow at her over an even wider than normal smile. “Awww...”

“I hate you,” Pam mouthed as she made her way away from the shoot and toward her office.

“Hi!” her voice was light, airy, teenager-y. New. Even when she had a crush on someone as a kid, she hadn’t sounded like that.

“Hello, beautiful,” a deep, slow rumble caressed her from the other end.

She let her eyes roll closed for just a second. Maybe it made sense that she melted when she was with him. Yes, that made sense. But his ability to reduce her to warm pudding with only a voice disturbed her more than a little bit.

“What’s going on?” she asked, hoping she sounded cool and not at all breathy.

He hesitated. “Not much. Just wanted to hear your voice.”

Sinking into a chair in her office, Pam covered her eyes with her palm, letting herself be consumed by the moment. “I’m glad you called.”

Pam wasn’t going to be able to take much more of this. Did anyone in the world know how sweet he was? Anyone? Did anyone know that he wasn’t an enigma at all, but rather an open book? Heart on his sleeve.

“I missed you, too,” she murmured back before adding, “Even if I did just talk to you last night.”

“But you didn’t see me.” He sounded steady, manly, not at all pouty. Okay, maybe a little bit pouty.

“Don’t pout. Did you forget a little thing called Fashion Week? We’ve been swamped since it concluded. And we had work to complete ahead of open call today.”

“Then afterwards you should have spent the night with me.”

The very thought made her shiver. She rubbed the back of her neck and squeezed her legs together. If he had asked her, would she have come? Maybe it didn’t matter, because he hadn’t asked. Instead, he’d called her late and groggily assured himself that she had made it home safely and her day had gone well. Now, he sounded…pouty, or at the very least upset about something. Was that it? Was he upset that they’d gone out for over a month, and nothing more than heavy petting had happened?

“My knee’s bothering me.”

The answer came quickly, but Pam frowned. What she heard in his voice was more than physical pain. She didn’t want to know, but maybe it was time to slay this sexual dragon. “And?”

“I know your knee’s hurting, but I want to know what else is on your mind.”

“It’s easier when I hear you rather than see you. You’re…distracting when I see you.”

Thankfully, he had no response to that. He was probably used to women saying the same thing. She heard him swallow, then say, “There is something I need to talk to you about.”

Her stomach, kidneys, lungs, heart, spleen all raced up into the back of her throat to form a strangling knot.

He was going to dump her because they hadn’t had sex.

The nutty part was that every time she was in the same room with him, she was assailed by hot sweaty images of them doing things that were probably illegal in some states. Oh, she wanted him, that was certain, but, Pam had avoided that kind of physical intimacy with him for a couple of weeks.

To be certain, Pam didn’t have a messed up relationship with coitus. She had a healthy sexual appetite. She just chose very carefully—and infrequently—when and with whom she would indulge that appetite. In truth, she had had very few partners if one compared her to just about anyone else in the industry. But what did link her to most everybody in the fashion world was that those few relationships had been short lived and more about a physical need than anything else.

Pam didn’t want kids and she didn’t want a husband. She didn’t want ties at all. And she railed regularly at the cosmos for binding her to so many people already against her will. Every day, she felt stretched too thin. Every day she felt worry. Every day someone near to her nearly broke her heart. How much worse would it be if…

This was it. This was the time to face the truth. Pamela Lane was scared. Once she slept with this man, once she gave in to that intimacy and accepted him body and soul, she was going to feel these things, worry over him, worry about him. She was going to want to make sure he ate regularly and didn’t drive too fast and got that knee replacement he’d been needing for more than a year. He was going to have another piece of her heart, and she was so afraid, as with one or two of the kids who came through the agency, as with her siblings when they got into trouble or even her parents when they died, that he might break it. She might not be strong enough to recover this time.

But she wanted him, more than she’d ever wanted anyone, and it scared the living daylights out of her. Because, if truth be told and as stupid as it sounded to her, a mature, no-nonsense woman of thirty-nine, she was already in love with him. Completely. Head over heels. Whatever he wanted from her, he could have, because he already had that piece of her heart she worried over.

“You’re planning to tell me you’re a mass murderer, aren’t you?”

“You have a hidden wife?”

He coughed. Not a good sign. “No, Pamela, I do not have a hidden wife.”

“Are you going to break up with me?”

“So you admit we’re a couple? You admit that I’m your boyfriend?” He laughed. In the past, when Pam would argue, he’d counter, “No, you can’t try and take it back. You can’t break up with someone who isn’t your boyfriend!”

“You are not charming,” Pam told him drily as she repressed a sigh of relief.

“People across the globe would disagree with you.”

“Sooo, see you late tonight, darling?” he persisted. If a wink could be sent through phone lines, Pam had just received one.

She sent him a smile. “Yeah, honey, see you late tonight.”

After Pam hung up, she sank back into her chair, limbs loose but nerve endings electrified. So, tonight they would talk, and if she escaped being dumped, she was going to finally let go.

Call Me Sir, Too (MM)
Stormy Glenn
In Shelf
$4.99
Tweets by
sirenbookstrand