Devin Santos has a boyfriend in finance, a magazine-worthy beach house, and a closet full of Purple Label—never mind that he’s as jaded as a foo dog and self-medicates with enough pot to numb an elephant. Though he can measure success in cobblestone abs, Italian linen sheets, and a gallery’s-worth of contemporary art, something’s still missing. The cracks are starting to show in his relationship with domineering I-banker Charlie Doherty, and no amount of chalky Venetian plaster can obscure them.

When a neighborhood admirer appears alongside his best friend Jude at the Pines ferry terminal, the former magazine editor is at first unimpressed. But Frank Duma is confident, clever, and shameless in his pursuit of Devin. The stormy, cat-and-mouse friendship that develops begins to unravel a life built on the premise that image is everything, and forces Devin to re-examine what it truly means to have it all.

Mario López-Cordero is a journalist who has spent more than a decade writing about design, travel, fashion, and culture. He is currently the senior editor of Veranda and his writing has also appeared in New York, Travel + Leisure, and Martha Stewart Living; he previously held staff positions at Elle Decor, Harper’s Bazaar, and House Beautiful. He lives in New York City. 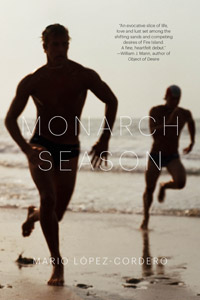