Monday: End of the Week

Monday, day of deception, conspiracy, cowardice, self-indulgence; day of kindness, love, courage during early and mid twentieth century anti-lesbianism, glass-ceiling norms.
Marion deserts her fiancé, Warren, and elopes to France with the artist Giselle. Returning to Warren, she meets Jocelyn, a celebrated singer, and the wife of Aaron Lobel, a physician. Aaron has established a clinic for the poor, anathema to the Massachusetts Medical Society of that day. He courageously combats his opposition while his wife resolutely continues with her career. Marion becomes a college professor. The Lobel son Jeremie comes to teach at the college. He and Marion become links for the contrast between the Lobel and Worfield families. The deceitful college president, Edmond Worfield, and his wife, Lisa, desire an exemplary family, as their frustrated and disappointing sons, Nelson and Conrad, compete over the Worfield's ward, Frances, they prevent the Worfields' wished for fulfillment. Within this turmoil, Marion succeeds and Jeremie learns the secret of his parents' turbulent relationship.
End of the Week shows that courage, endurance, and love triumph over cowardice, conspiracy, and degeneracy, that these intertwined persons sustain or destroy themselves by self-indulgence or commitment to social benefit.

About the Author:
Richard Shain Cohen of Cape Elizabeth, Maine, is originally from Boston. He retired from the University of Maine at Presque Isle after serving as Vice President of Academic Affairs and Professor of English. He holds B.S., M.A., and Ph.D. degrees.
He served as editor of the journal Husson Review and was principal participant in a National Endowment for the Arts Grant for “Images of Aroostook” that was exhibited throughout the State of Maine.
His own publications include: Healing After Dark: Pioneering Compassionate Medicine at the Boston Evening Clinic (2011), The Forgotten Longfellow: Man in the Shadows (2010), Only God Can Make a Tree, poetry from himself and his brother, Alfred Robert Cohen; and the novels Our Seas of Fear and Love, Monday: End of the Week, Be Still, My Soul, and Petal on a Black Bough. He also wrote chapters for Aroostook: Land of Promise, academic reviews, other articles, and – with the help of a Shell Grant – a monograph on Samuel Richardson that can be found in major library holdings. 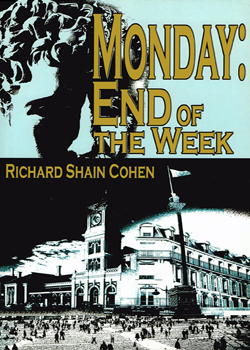 Monday: End of the Week