A bully named Wild Billy Buffoon shows up leaving more than just his carbon footprint. Billy with the help of his two stomping feet push the town of Foots past its limit until he’s confronted by the town sheriff. What will it take for Billy to change his ways? 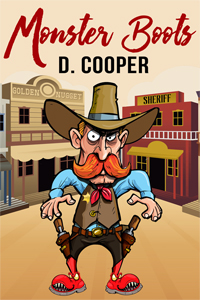 Let me tell you a story about a time when shoes and boots walked through the town of Foots.
You could hear the people’s feet stomping and the sound of horses’ hoofs.

Giants and men lived together in peace and harmony,
but there was one giant who thought very differently.

In the land of shoes there were always stories of good news,
for everyone could sing the blues.

Autumn was most fun when the land became brightened by the sun.
Even the leaves on the trees waved back at everyone.

Sparky and Gunner were two boots colored in red,
while their master wore leather pants and a brown cowboy hat on his head.

Suddenly there came a stomp getting louder near the boardwalk saloon.
Others became shaken by a giant named “Wild Billy Buffoon.”