Moving Beyond the Christian Myth: The Next Step in Our Spiritual Evolution

Moving Beyond The Christian Myth takes the next step beyond Sloat’s first book on spirituality, A Handbook For Heretics. He explores the roots of the Christian faith, tracing them back to their pagan origins in ancient religions. Then, one by one, he analyzes the essential beliefs of Christianity, showing how they cannot literally be true. The various chapters contend that:

The remainder of the book is filled with stories of mystical experiences which demonstrate how the spirit world is an integral part of our daily lives. These topics include: Out-of-Body Experiences, Visions, Past Life Recalls, After Death Communication, Angel Communication, Pre-Birth Experiences and Coincidence. Sloat argues that these stories reveal spiritual truths which are not part of the traditional teachings of religion. He asks the church to admit that its story is based on myth rather than literal truth, he urges the church to incorporate these experiences into its belief system, and he concludes by presenting a vision of a future in which people can worship God as the creator, not of a religion based on the fear of hell, but of a spiritual kingdom founded on love, light and hope. This book will be an inspiration to all those who are seeking something beyond the mythological teaching of the past.

About the Author:
John W. Sloat, a former Presbyterian minister, served churches in Pennsylvania and Ohio for over 40 years. He holds a B.A. from Denison University, 1954; an M.Div. from Princeton Seminary, 1957; and a Th.M. from Pittsburgh Seminary, 1977. Previous books include Lord, Make Us One (non-fiction, 1986); The Other Half (fiction, 2001); Memories of My Misadventures (fiction, 2008); and A Handbook For Heretics (non-fiction, second edition, 2009). Several of his sermons have been included in Pulpit Digest, a national preaching journal. He has been married to Helen Burdick Sloat, a psychiatric nurse, for 56 years, and they have three children, eight grandchildren, and four great-grandchildren. A pianist and organist, Sloat also plays the French horn, is a scratch model builder, and leads spirituality groups. 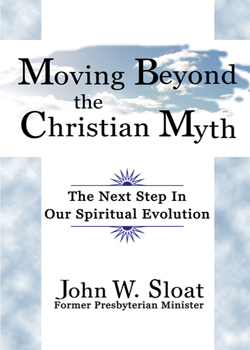 Moving Beyond the Christian Myth: The Next Step in Our Spiritual Evolution