Holidays don't always come easy. For Irene, being with her family on Independence Day wasn't any easier.

Then, she meets Mr. Independence and she realizes so much more.

Can this stranger be what she needed to be happy? And why did she feel that there was more to their relationship than just a weird first encounter? 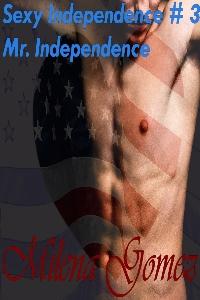 Irene glanced at what looked like a nearly naked man. Her jaw dropped noticing the bulge between his legs. It seemed as if the man had just stepped out of the shower and was only wearing a towel with the American flag and an eagle printed on it.
Holy Moly!
"I'm Mr. Independence, and your new roommate. Care to show me around?"
"Half naked? You must be crazy! Get out of here!"
The man didn't seem concerned about her reactions. He waved off her protest and flashed her a quick smile.
"What, Irene? Never seen a naked man before?"
Irene didn't know what to think but her tongue was quicker than her thoughts.
"Only in my holiday fantasies!" she blurted. A blush suffused her cheeks."Oops!" She shook her head in disbelief. "It can't be, I mean it was just one day and it was last year's Fourth. I mean you're not real because you're based on an unknown model I saw once in a magazinemaybe I've seen you in person before? It was just one day but I have so many memories about you, about meabout us."