Another sensual romantic novella, but the sensational J J Monroe

Journalist Izzy Renwick writes a mischievous blog under the pseudonym Missy Misdemeanor. Going undercover as a flight stewardess to investigate the “Mile High Club”, she hooks up with the gorgeous Henry Hopper, known to her fellow stewardesses as Mr Remarkable. As the sparks fly between them high above the Atlantic, Izzy comes to understand that Henry is indeed remarkable in and out of the bedroom but when he finds out she intends writing about his deeds he pulls the plug and walks away. Is this the end of the line for Missy Misdemeanor, or can she write herself a happy ending?

Edited by the amazing Xcite team, including Elizabeth Coldwell. 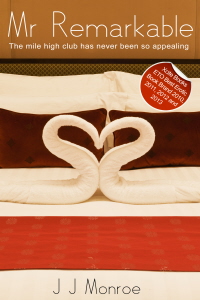 He is standing in the aisle, packing his rucksack into the overhead locker, blocking my attempts to pass.

‘Sorry,’ he says with an easy smile and moves to allow me to pass, though he doesn’t move entirely out of the way, which means that when I pass we brush against each other. It is slight and hardly newsworthy, but the most minimal contact sends my heart into the stratosphere and I realise I seriously have to get a grip. And then I remember my dear readers and my promise and it occurs to me that Mr Henry Hopper, player that he is, may be just about perfect for my little experiment, so I turn back.

‘I know all about you,’ I say, hand on my hip, best foot forward, the girls on prominent display. ‘And I just want to warn you that it won’t work on me.’

‘Excuse me?’ he replies, raising an eyebrow.

‘I think you know what I mean,’ I continue. ‘So, just so you know, I’m really not that kind of girl so I don’t want you getting any funny ideas.’

‘I’m glad we’ve got that sorted.’ I turn to go, making sure I give my bum an extra wiggle knowing full well that he is watching.

‘So what happens if I request an extra pillow?’ he asks, forcing me to turn around. ‘Are you going to have me arrested?’

He holds out his hands in a conciliatory manner and shrugs. Contact has been made and I feel utterly psyched. Between checking on my allotted other passengers I sneak a look in the mirror and give the girls a lift just to make sure they are looking ultra-perky. And then …

The door to his hotel suite closes. The pleasing clunk of a well-made door shutting is music to my ears, but I have no time to look around. There is no time for anything. This sexual energy that has been building between us is like an electrical storm: it builds and it builds and sooner or later it must be released. Sitting close to him in his limousine, the feel of his denim-clad thigh was like a nuclear reactor against my skin, the desire in his eyes making me wet and desperate for his touch, yet he kept me at bay on the ride into Central London. He knows how much I want this because when he looks over I see the flash in his own eyes; the raw, animalistic passion that glowers just under the surface. We are animals, no matter how hard you try to dress us up. We have the basest of instincts and when they consume us our true selves are stripped bare. Which is just what I intend doing to the gorgeous Henry Hopper.

I want him inside me, grinding into my very soul, the feel of him coming hard against my sex, him pinning me to the mattress as he delves deeper and deeper still. I want to touch him, to taste him, to feel him shiver and explode and shrivel inside me when the last of him has sprayed into me. Yes, I want these things and so very much more. I am consumed with lust and desire and he will sate me. As he devours me completely the world will finally have meaning.

His hands are on my face immediately the door closes, shutting out the world so that our own private voyage of discovery can begin again. The blue touch paper, already lit in the First Class cubicle, is now sparking and in danger of flaming totally out of control.

Strong hands frame my face, holding me as his lips do their work, his kisses sweeter than nectar and a thousand times more addictive. They draw me in like the spider does the fly, they paralyse and burn, they jump-start my whole body and I am flying above Venus. It is like being a teenager again and in the first giddy flush of a romantic crush. I want to laugh. I want to scream. I want to wrap my arms around this amazing man and hold him to my heart for ever, but then those wicked lips start wandering again and all thoughts tumble out of my head. My body is sizzling with desire and my core is white-hot and smouldering for his touch.

With no witnesses and no flimsy cubicle walls to constrict we are unburdened of our shackles. My jacket is despatched with ease and the buttons of my blouse tumble away, offering little in the way of resistance. His tongue traces lines on my neck and I fear I will flood the entire room. Dragging the blouse down, Henry nuzzles my shoulder, reaching the straps of my brassiere. He teases with his tongue, tasting the fabric, following the line of my strap kissing under my arm, touching, his mouth closing upon my breast still encased in the silky fabric. My nipples are mesmerised by this master of the occult. They sing to him, crying out to be released from this terrible enslavement but he does not hear their cries, turning his attention back to my lips, his tongue playful and wicked. He backs me up against the wall, his tongue growing ever hungrier as the dam bursts and I flood the entire floor with pure, unadulterated want and lust.

‘Fuck me!’ I mutter and my voice is a husky whisper.

‘I intend to,’ he whispers back between unleashing more love bombs in the form of lacerating kisses.