Mrs. Queen's Chump: Idi Amin, the Mau Mau, Communists, and Other Silly Follies of the British Empire - A Military Memoir

Mrs. Queen’s Chump is the military memoir of a young man who, naively acquiescing to a period of “adventure” after leaving boarding school, soon found himself enmeshed in the agonies of subjugated peoples caught in the turmoil of a collapsing British Empire and demanding restoration of their dignity and rightful human freedoms. Left to deal as best he could with his own transition from boy to man – somewhat before PTSD became a recognizable quantity – he realized as a born Canadian citizen he might easily have avoided service in Britain’s army – but he had committed himself, so entered with his eyes open and became a keen observer.
In stories that are sometimes funny, sometimes frightening, yet somehow tinged with the sadness that always jolts the loss of innocence, the author tells of experiences as an infantry officer fighting in the jungles of both Kenya and Malaya. They are incident of another time, yet hauntingly contemporary – soldiers sent to far off corners of the world to secure the privileges of tough and ambitious colonizers, themselves champions of Empire (no matter whose) who feel full entitlement over both people and resources. Bring up the troops!
Despite clear dangers, thousands of bright-eyed and brainwashed young Brits whose invincible dads had recently thrashed Hitler were now, by the late 1940’s and 1950’s, keen to do their bit, to head abroad and “have a go” at running the Empire. They sallied forth into what they thought a halcyon sunset in need of some burnishing, but in reality dazzling in its madness. By the end their military weight and wallop proved insufficient to address the anger of millions of very “restless natives” – or to douse the frenzies of the likes of Idi Amin.
The initial disease was Empire Myopia. Within a short time, and like Kurtz in Heart of Darkness, those who had come to impose order themselves succumbed to an Idi-like dementia that tumbled the whole wretched Empire to its knees.

About the Author:
Born in Vancouver, Canada, Jeremy Hespeler-Boultbee started school in Australia, continued in the United States and Canada, and graduated from high school in Britain – this last giving rise to the military service described in these pages. A young and insightful officer, whose views often ran counter to those expressed by his superiors, he was in a unique position to observe the collapsing British Empire. Later, as a journalist living in Lisbon, Portugal, he was again witness – this time to the revolutionary shake-up and demise of another of Europe’s entrenched old orders. Hespeler-Boultbee has worked on major assignments in Canada, the United States, Portugal and numerous countries in Africa. In addition to writing, he is an architectural historian specializing in Renaissance Portugal. He considers “home” to be Victoria, British Columbia, Barrancos, Portugal and Bahir Dar, Ethiopia. 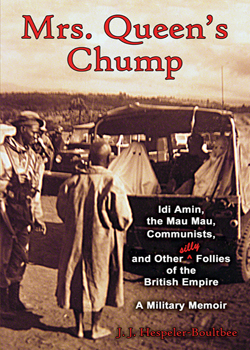 Mrs. Queen's Chump: Idi Amin, the Mau Mau, Communists, and Other Silly Follies of the British Empire - A Military Memoir