Murder, is that your final answer? High school senior Jason Greevey seems to think so. When winning contestants from a local restaurant's trivia contest begin turning up dead, runner-up Jason worries that he will be the next weakest link! 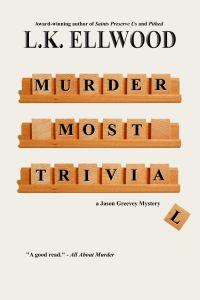 She was a blur of red lipstick and oily black curls, wobbling
ungracefully toward Dan Greevey from a gaggle of mid-week revelers
congregated on the second floor of Norfolk's Waterside entertainment complex. A dewy plastic cup of beer crinkled in her hand as she bayed her greeting. "You're lookin' sponge worthy, wanna make me the queen of your castle?"

A gust of beer-scented breath stung Dan's eyes and nostrils. He turned his face away but was assaulted from the side by a blast of cigarette smoke originating from a clique dressed in sharp business suits. The woman, his son Jason had pointed out as they ascended the stairs, strongly resembled Seinfeld character Elaine Benes. Sporting a voluminous hairdo similar to that of the television character with the curls piled on top of her head, the woman wore a long floral print skirt, saddle shoes with white socks and a black sport coat, a surprising complement to Dan's white Polo shirt and blue jeans.

"No thanks, I'm spoken for," he said politely and turned to follow his girlfriend, Willie, and his son into Jillian's. Pseudo-Elaine, however, managed to pin Dan against the picture window of the Christmas shop situated between Jillian's and Bar Norfolk, blocking all escape routes back to his party. She showed no signs of letting him go, either.

"So," she grinned, exposing tall rows of white teeth and giggling like a smitten schoolgirl, "you think I'll win the contest?"

Dan spied a distant poster advertising Bar Norfolk's television character look-alike competition, put on by the popular night spot as part of the Waterside's "May Sweeps" week. The Waterside's other bars and restaurants were sponsoring similar activities. Dan, at the behest of Willie and Jason, had allowed the two to drag him to Jillian's for a trivia contest designed along the lines of Trivial Matters, currently the most popular game show on prime-time television.

Dan wondered if he would make it inside Jillian's in time, seeing as how this woman had no intention of moving along to more interested, more intoxicated prey. He glanced over the woman's shoulder; several feet away Willie was studying the menu display in front of Jillian's and turned in his direction only when Jason elbowed her arm and pointed toward him and Pseudo-Elaine. Apparently neither one had witnessed his abduction, and they laughed at his predicament.

A little help here? Dan mouthed, growing irritated. Pseudo-Elaine, meanwhile, braced her free arm against the wall and leaned in with the other to offer Dan a sip of beer, which he declined with a gentle swat.

"No thanks. Uh, yeah, I think you'll win," Dan said at last, easing to the left along the storefront and carefully moving the woman aside. "You got the cast of Law and Order over there beat, anyway. Nice meeting you."

He hurried away and a string of animated partygoers flooded the space between him and the woman whose glazed yet devilish eyes followed him to the entrance of Jillian's as he ushered Jason and Willie deep inside.

Jason and Willie continued to laugh heartily at Dan's slight misfortune, each clinging to Dan as they wove through Jillian's noisy video game parlor toward the back dining area, where the trivia contest was scheduled to take place. "Dad, that was so funny!" Jason gasped, soothing his father with a good-natured pat on the shoulder. "Did she tell you that you were sponge-worthy?"

"She did. What's that supposed to mean, anyway?" Dan asked to further howling laughter. He furrowed his brows; Jason noticed his father's perplexed expression and explained briefly yet candidly the Seinfeld episode that spawned the catchphrase: how Elaine, in a frugal attempt to conserve a dwindling supply of contraceptive sponges, became quite selective with whom she chose to use them.

Dan reddened and shook his head. "Utterly tasteless," he declared, surprised to hear such talk from his son's mouth. A copy of his father with hazel eyes and short, straw-brown hair cut short with bangs, Jason was a senior at Colley Avenue High this year, where Dan taught Latin and Advanced Placement English. Dan enjoyed having a job that allowed him to be home for Jason, and while the boy enjoyed the freedom to watch movies and television and purchase music without parental supervision, Dan never imagined the cultural influence would be so strong as to cause Jason to repeat and relish such crude humor.
Jason was a good kid, a straight-A student, Eagle Scout and altar boy, the envy of most parents in their parish who suffered unruly offspring. Dan had raised his son to appreciate better things than off-color jokes.

"Aw, Dad." Jason shook off his father's frown. "It's just a TV show. It's not like I'm dressing up as characters like those people back there were."

"Yeah, and don't forget the Trekkers," Willie added. "They don't need an occasion like this to wear their uniforms in public."

"Whatever," Dan grunted, exasperated. He looked around at the people hypnotized by the flashing arcade lights and calliope music and realized he was more concerned now with the number of drinks in hand rather than television shows. These same people would be on the streets in their cars later. Perhaps he should have been firmer with Jason, he thought, and negated this whole outing. They could have stayed home and watched the trivia program from the safety and sanity of their living room. Willie could have come over, they could have popped some corn and ordered in pizza and kept score on note pads.

Then again, he and Jason rarely did anything out together anymore given the growing piles of homework Dan brought home to grade, not to mention Jason's increasing social calendar and part-time job, though Jason was planning to resign this weekend to free up his last summer before college. To have Willie present was a plus. Herself a teacher at Colley, she got along fine with his son long before she and Dan began dating six months ago.

He relaxed a bit and let Willie lead him by the arm toward the dining area. He did like Trivial Matters, and maybe they would have some fun with the contest. "Maybe I'll just kick your butt, too," he teased his son.

"Oh yeah? You willing to put your money where your mouth is?" Jason drawled.

People filed noisily into the back dining area, many toting drinks
procured from other bars and eateries located within the huge entertainment center that was Jillian's. This particular area was decorated in a sports motif: regional team pennants, posters and photos were tacked high on the walls alongside worn football jerseys and other memorabilia. "This place must get crowded during the big sports events," Dan commented to himself.

A hostess seated the three at a booth alongside a large picture window overlooking the Elizabeth River. The town of Portsmouth, across the water, twinkled and hummed along the late evening horizon. Willie pointed at the progress of a distant hotel under construction as a waitress arrived to take their drink orders and deliver menus.

"We've set up the complimentary appetizer buffet by the bar," the perky, petite blond in the skimpy blue and white uniform explained in a little girl's voice. The shiny name tag pinned to her half-exposed bosom announced that her name was Courtney. "I'll be right back with your drinks and answer sheets for the contest."

The waitress bounced away, her ponytail swaying like a pendulum, and Jason leaped from his seat immediately afterward for the buffet with a promise to get snacks for the whole table. Willie, anticipating a private moment, slid closer to Dan but was surprised by the mild scowl on his face.

"What?" she asked innocently.

"Thanks a lot for coming to my rescue back there," Dan said sarcastically. "I'll try to remember your unselfish courage when I'm drafting my will."

Willie only tossed her head back and laughed, throwing her frizzy bronze hair in the air. The stale, yellow lights beaming down upon their booth cast a kind of ethereal glow about her, bringing out the copper highlights. Dan, no longer able to hide his irritation, laughed along with her, enamored with how the look enhanced her light mocha skin and brown eyes, which were at the moment sparkling and reflecting the gaiety around them.

"Oh, Danny, loosen up!" she chided. "She was harmless! Two more seconds and she probably would have slumped to the floor and you could have stepped over her towards freedom."

"Now, Willie," Dan groaned. He saw little humor in the sight of the intoxicated Waterside patroness. Not that Dan was a complete tee-totaler; his Irish father often joked about how Greevey blood was seventy-proof, but he knew his limits and it ached to see others abusing themselves in such a manner. Who knew what poor schlep pseudo-Elaine had pinioned in a corner of Bar Norfolk at this very moment? Worse yet, would she eventually be the one preyed upon by somebody unscrupulous and willing to take advantage of her current state?

Lord, see her home safely, he prayed. See them all home, sober and wiser for it.