Mystery of the Broken Vase

Shayla’s an only child, but ever since the vase was broken she feels an intense desire to run, but where to? What does it mean? 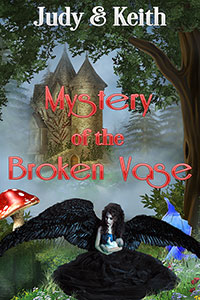 Mystery of the Broken Vase

Shayla awoke, shivering. Her dream had been terrifying, almost a nightmare and very disturbing. She was being held captive in a dismal forest, and her nanny had just been fired. Her captor was a fairy who always wore a plain black tunic, which matched her long black hair and eyes. Even her butterfly wings were black, and her pale complexion made her appear goth. Shayla was scared despite the fact nanny had told her not to worry. She’d woken at that point…sweating and cold at the same time. There was a small cut on her arm, and it was still bleeding a little. I must have scratched myself in the night.

The terror of the dream soon faded in the morning light. She got up and went downstairs in her white nightgown. Shayla was twelve, slim and tall for her age at five-foot-three. She was an only child, with green eyes and shoulder-length very fine blonde hair. She stopped in shock. There on the table, the very expensive blue-glass vase was broken. It had a circular hole in it.

"Mom, how did that happen?" she shouted as loud as she could.

Her dad looked in. "I'm off to work. What's the problem?" All Shayla could do was point. "Don't worry, mom will sort it out." He gave her a quick kiss and was gone.

Mom arrived. "Typical, whenever there's an issue he always seems to be missing in action. What is it?" Shayla was still pointing at the vase. "Oh…I see. How could it have happened? That's very peculiar. I wonder if we had a break-in. I'd better go and have a look around." A couple of minutes later Mrs. Scott returned. "That's strange. I'd left the deck door unlocked. Let's check to see if anything is missing. I'll look in the other rooms. Can you search in here?"

Shayla could hear her mom going from room to room then going upstairs. I feel an urge to leave. I don't know why. It's not school today. Anyway, I've got to help mom. She looked around the dining room. Nothing obvious is missing. She walked up to the table and looked closer at the vase. The piece of glass had fallen out, leaving a circular hole behind. It wasn't shattered. Just one piece lay on the tabletop. Had there been a flaw? The vase had been sitting on the table for as long as she could remember. She went to pick the piece of glass up.

Mom reappeared and yelled, "Don't touch it. It might be evidence and have a fingerprint on it. I'm going to phone the police. Nothing seems to be missing, but it's better to be safe than sorry."