Natalie Locke and the Sundancer

Natalie Locke learned her lessons about texting while driving the hard way when an eighteen-wheeler crossed her path and she nearly lost her life. Thanks to her accident, she met her new mentor, Lone Eagle, a Native American Shaman who is destined to teach her about the healing powers in the rocks and stones she sells in her shop.

Can Lone Eagle teach her enough to mend her broken bones and dance at her high school prom? 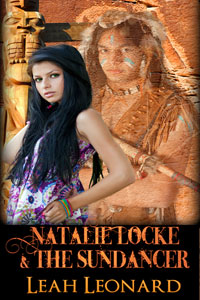 Natalie Locke and the Sundancer

Ten minutes later, the girls were on their way home. Natalie’s stomach churned from the moment she and Tracy left the San Felipe Pueblo all the way down I-25 toward Albuquerque. She was worried enough about Lone Eagle, and the flat tire didn’t help any either. Since they were already over an hour late getting home, they were bound to be in big trouble. Tracy’s mom wasn’t very flexible about bending rules. They called her once earlier in the evening to say they’d be delayed. She hoped Mary wouldn’t be too upset. They did call, after all.

“Man we got lucky.” Tracy sighed.

“Yeah no kidding. The officer came along just in time.”

“Yeah, he did, right? He sure knew how to change a tire.”

This made Natalie’s stomach even more upset. “How will we explain the spare tire on the car and the other in your mom’s trunk?”

“We’ll tell the truth – we got a flat and an officer helped us out. No big deal.”

“Yeah but she’s gonna want all the details, you know?”

Natalie and Tracy were both raised to be honest, and this situation was going to push them to the limit. Natalie felt ill. This was all her fault. And she was also anxious about Lone Eagle. He was so upset when they left him. She wanted to talk to him again, but apparently he wasn’t interested and turned off his phone. She tried to push him and his attitude out of her mind, knowing the mess with the car was a far bigger deal, but the situation with Lone Eagle bugged her. While they drove, Natalie tried his number again a couple of times, but there was no answer.

“Think his phone is off?”

“Don’t worry about it. He’s probably asleep or something. Try again tomorrow.”

Natalie knew she was right, but the whole thing bugged her more than she wanted to admit. “What am I gonna do, Trace? He must feel horrible. I don’t want him killing himself or something.”

Tracy laughed. “Native Americans don’t believe in suicide, so I’m sure he’ll be okay. You’ll reach him when you’re supposed to, besides, we just left him. You told him everything.”

She wasn’t comforted. She pressed redial again. “Yes, but did you see the look on his face? I don’t think he believed me. He wouldn’t speak to us. I hope he’s okay, that’s all.”

Tracy kept her hands on the wheel, eyes glued to the road. She weaved in and out of several cars until they broke free. “I wouldn’t know. He’s your friend, not mine. Besides, the one person who might kill someone tonight is my mom when she finds out about the car.”

Natalie was not comforted by the humor. She dialed again. No answer. She needed to stop. She hung up and stared out the window at the lights in the foothills of the Bernalillo Valley. She looked up at the Sandia Mountains and thought about the flights she and Lone Eagle had taken. He taught her how to transform herself into a hummingbird while she slept, and the process helped her heal from the accident. He also showed her the energy from the stones in her rock shop and how they could be used to help her heal. She was grateful for the knowledge but needed to know more. First, though, she wanted to make sure he was okay. She had to get a hold of him, talk to him more about what happened and reiterate things. She dialed again. One more time, then she would stop. This time the phone rang and rang. No voicemail. Figures. Lone Eagle was not like other people she knew. He was timeless, not interested in modern technology. Besides, in the few months she knew him, she discovered words never worked with him. There was one way to reach Lone Eagle and make him understand and not by phone. She would need to reach him in her dreams tonight.