What was going on in that house across the street? Rachel had been watching the endless stream of men coming and going for days. Now it was time to find out what lay behind the closed door.

They say that true love never dies, and they’re right. Love didn’t die, but Mike did. And yet, death is just a door way, and sometimes you can open that door and bring those you love back to you, even if its only for a moment that feels like forever.

Letting the family take turns in deciding where you go on holiday can land you in some interesting places, like behind a horses butt in a cramped caravan. It’s at times like these that you need a sense of humour and to remind yourself just why you got together in the first place.

Some law firms can be a law unto themselves as Alison Mills is about to find out. Wallace and Barker is one of the old school firms, where the men are used to doing whatever they want. They don’t hire many woman and if the rumours are true it’s because of the harsh rules. It’s an incredible opportunity though, and Miss Mills will do anything to be a part of that world.

These stories have also been published in Five Minute Fantasies Two 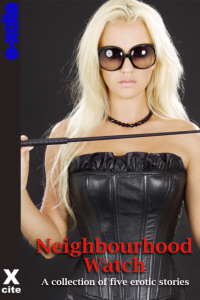 And yet, as secretary of the local Neighbourhood Watch, there was plenty that Rachel could do about it. Thanks to her prime location, she’d been asked to take note of all the comings and goings, but it wasn’t that which made her sit by the window all day – it was a deep, growing fascination with the beautiful, powerful woman across the street. Rachel had never liked the Neighbourhood Watch, but Mike had forced her to join the group. She’d always seen them as a bunch of snoopers, hypocrites and killjoys, keen to stop anyone from being different or having too much fun. To them, the woman across the road was a nuisance, a danger and a threat to house prices, but Rachel had seen the changing look on the faces of the many men who entered her lair. She’d seen their edginess replaced by intense satisfaction, and she longed to experience the change herself.
It was an hour before the first customer left, emerging with a newfound spring in his step. His visit seemed to have set him up for the day, allowing him to face another boring shift at the bank or office. Rachel thought of all the housework she was meant to be doing, and then of how quickly her husband had hurried off to work that day. He could have set the alarm a little earlier, then they could have made love before he left. The chores might have seemed more approachable then, with the afterglow of orgasm still in her system.
Sex is a positive force, thought Rachel, as a second car pulled up outside. She stood up again, leaving a bigger chink in the curtains this time, almost as if she wanted her mysterious new neighbour to know that she was keeping watch. The client walked up and rang the doorbell. His body was trembling with nervous tension, but the mistress of the house would know how to relieve it. She opened the door and beckoned the man inside, then her piercing eyes flickered up and down the street. Her gaze skipped straight past Rachel’s house, but then something clicked and she looked straight back. Eye contact was made, their gazes met, but it was all too much for Rachel to take. Ashamed of being caught, she stepped back from the window. Her heart was beating almost twice as fast, but something even stranger was going on.
Rachel had no real awareness of what had made it happen, but her hand had crept inside her knickers. Her middle finger was rubbing against her clitoris, the soft, circular motion causing sticky juices to ooze from her gash. She regained her senses for a second, telling herself what she was doing was wrong, but then something made her reach for her cleavage. Her hands cupped each of her breasts in turn, feeling how swollen her nipples had become.
‘What’s happening to me?’ Rachel mumbled to herself, turning to gaze in the mirror above the fireplace. Her face was flushed, but it was the look in her eye that really gave the game away. It was the same look of awkward edginess that all the men who visited her neighbour had. She did some mental reckoning – she and Mike had not made love for over two months, so the tension inside her clearly needed some release. She thought of taking a bath and masturbating, but that meant going upstairs, and for some strange reason she couldn’t bear the thought of tearing herself away from the window.