Lierra drags her barely tolerable fiancé to New Canterbury, a planet where history is almost recreated for the nostalgic, human colonists. While preparing for their wedding, however, she encounters Forrest Ecks, her hero and one of the premier artists of the time.

Despite his fame, Forrest Ecks has little in the way of promise. Injured in the war, his painting career has withered along with his damaged hand. When the Lady Darvid shows him an E-sel full of amateurish, but promising sketches, Forrest takes on the task of teaching the woman. But Lierra herself proves far more interesting than her paintings.

Lierra’s engagement hovers ever closer, but more than her art blooms during her lessons with Forrest. With the little time they have, can they teach each other that giving up is never the best option? 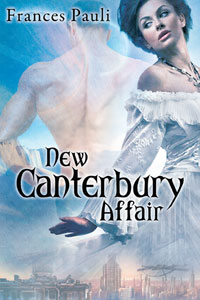 “Technically, yes,” she said. Collette made a noise to her right. Lierra had nearly forgotten her cousin in her fury to prove herself to a complete stranger. Now she heard the girl shifting from foot to foot. No doubt, nervous at the situation, at the man’s blatant disregard of their status.

“You’ve left something off.” His eyes narrowed. “There’s a but hanging on the end of that statement.”

“Yes,” Lierra stared straight back at him. Behind her, Colley squeaked. “Personally, I prefer his earlier works. The later pieces lack his initial passion.”

“Skill, yes, but without the emotion. I saw Woman with Yellow Veil yesterday…”

The man snorted at her, actually snorted.

“You dislike it? I’d say it’s possibly his best work.”

“I certainly hope not,” he said. “It’s sloppy, sentimental and amateurish.”

“Quite easy to say, I imagine, from the sidelines.”

“It’s widely considered,” He stole her earlier words. “That Ecks’ work became progressively more sophisticated as he mastered his medium.”

“Mastery is not a fair trade-off for passion.” Lierra refused to be unnerved, though a shadow of concern blossomed in her thoughts. There was something about this man, something intense that went beyond his fine clothes and long black gloves. “The early paintings had a wild edge, something raw and unchecked—”

“Reckless abandon?” The corner of his mouth twitched into an amused smile.

“Yes, in a way,” Lierra answered. He’s enjoying this, she thought. In truth, so was she. The debate topped Trent’s occasional, Hey babe, what you doodling? by a landslide.

“Sloppiness is no substitute for craft.”

“Craft is good,” she said. “But without the raw emotion it can come across as sterile.” Behind her, Colley let out another squeak.

“Sterile?” His eyes widened. Both of his eyebrows raised in a startled stretch. A warning bell chimed in the back of Lierra’s mind.

He stepped forward and gave the Ecks a good long stare, tucking one of his hands into the front of his coat and tilting his head sharply to the side.

Lierra had no idea if he referred to the painting or her comments, but the chime of alarm escalated. She heard sirens in her head, stared at the glove tucked into his doublet. She darted a helpless glance in Collette’s direction. Her cousin inspected her own feet, demur, unhelpful. Lierra scrambled for something to say, but he spun away from the painting before her brain supplied any answer.

“It has been a pleasure.” He bowed, a stiff, formal gesture that might have soothed her had it happened ten minutes ago. “I look forward to more conversation over dinner, Lady Darvid.”

She stood frozen, knowing from the heat spreading across her cheeks that she blushed and that he noticed. The man knew exactly who she was. Her brain whirled. She managed a rather breathless, “Likewise,” and watched him pass, stride across the room and make his exit. The Gallery doors swung closed in slow motion.

“That was Forrest Ecks, wasn’t it?” She turned to where Collette waited. The girl’s horrified expression answered for her. Forrest Ecks, of course it was.