On his way to an important business meeting in Chicago, Arte Shaw dies of unexplained circumstances on the flight. At his funeral, his wife, Anita, is approached by his long lost cousin, Penny, who shows her a photo of a supposedly cursed family ring. Lying, Anita says she never saw the ring before. Later she encounters it again it in Arte's personal effects and wonders if Penny's claims are true. Her sister, Emmy, convinces Anita to keep it, dismissing Penny as the family nut. Twenty-eight years later, Anita is shocked when her son, Art, finds the ring and asks to wear it as his wedding band. Will he live to tell about it? 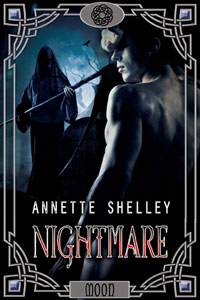 Arte propped himself up on the pillows, his mouth gaped open. "My God, woman. Get over here." He tossed the sheets aside and patted the bed beside him.

Anita watched while he removed his briefs and handled his erection. "I've got something for you."

"Is that any way to talk to your wife?" she teased.

"You're right. I've been bad." He turned around so his ass was just within striking distance.

"You have." She spanked him hard and pulled out the handcuffs, holding them over her head. "Now put your hands up, mama's gonna have to arrest you now."

Arte flipped on his back and stretched his arms overhead. "Yes, Officer Shaw."

Anita jumped on the bed, straddling him and cuffed his wrists together. "There you go." She kissed his bare chest, starting from the base of his chin, slowly working her way down his neck, to his torso. She flicked each nipple with her tongue.

Thank God Emmy had told her what to do. Her younger sister had been married for a few years and was a world of help in the sexual advice department. "Like it?" She kept moving down until her mouth was wrapped around him, her tongue teased him into an even harder state. She reached her fist around his shaft, squeezing it tight and felt him harden even more.

"Not yet," she said with a full mouth. She slid her rounded lips over him, stroking him with her hand, rubbing her breasts on his hairy legs which teased her nipples.

Arte reached out to try and grab her shoulders, but couldn't move. "Hey!"

Anita laughed. "What's wrong? Someone having a little trouble there?"

"You're gonna be in trouble when I get out of these," he teased.

Leaning in to kiss his neck, Anita ran her hands down his torso, making him shiver. "Sounds good to me. Let me get the key." Straddling him, she reached to the nightstand, grabbed the key and twisted it in the lock on his right hand first.

He instantly slapped her bottom.

"Uh huh." She freed his other hand, leaned down on his chest and teased his nipple. "I've been a bad girl."

"So I heard." Flipping her on her back, he spread her legs and began returning the favor. He teased her clit with his tongue, dipping deep inside her every so often.

Arching her head back, Anita moaned as he licked her and teased her nipples with his free hand. Emmy had mentioned this to her, but she had no idea it could be so good. "Ahhhh."

"I want you." Propping himself up on one hand, Arte dipped forward, pumping himself with his free hand. He slid his cock's head on her wet opening. "Ready?"