Nightvine is an amuse bouche of short, dark stories including the tale of an elderly woman who goes shopping for cat food, an Army Company with a rash of AWOL’s, and the story of a nurse who shares a plant with special patients.

These pieces are for fans of the macabre in this homage to The Twilight Zone, Tales of the Crypt, Night Gallery and the work of Charles Addams.

The stories in this collection are for lovers of horror and horror surprise, every day people in situations that do not always have an every day ending. 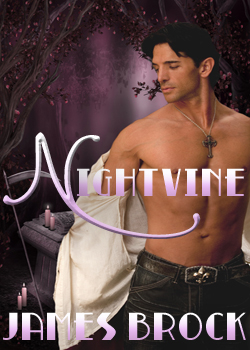 Numerous stories are included in “Nightvine.” Following are excerpts from two of them.

“The Pride of Vera Lake”:

Today Vera was forced to leave the house. A winter storm had raged for almost a week, knocking out power and snowing everyone in. She wasn’t so concerned for herself, but the cats needed food. They were so hungry. How Herbert had loved those cats! They were such a comfort now that he was no longer there to watch over her.

Shoving a hand down into the left pocket of her winter coat, she pulled out a thick pair of gloves just as two cats the color of a well-worn basketball, emerald green eyes shot with streaks of silver and gold, appeared out of the now darkened parlor and began to brush up against her legs.

“There, there. It won’t be long and I will be back with something wonderful for you,” Vera whispered, the cats looking up at her, then moving quietly on down the long front hallway toward the kitchen in the back.

Stepping into a large old fashioned kitchen, the clerk set the bag on a table in the center of the room. Although there was plenty of afternoon sunlight streaming through the windows, the room was just as spooky to the young woman as the much darker hallway had been.

She started to turn when she heard a soft noise in the hallway behind her. Whirling, she saw nothing. “Old lady, is that you?” she finally called out.

When there was no reply, the clerk took a step back, then froze as she heard a low growl, a deep, guttural noise coming from the darkness of a corner where she could see large eyes glistening, eyes the size of a man’s fist, deep emerald and shot with flecks of silver and gold.

“Lady…,” the clerk began as a cat stepped from the shadows, tufts of stiff orange fur sticking up in wild clumps from a lean muscular frame standing the size of a medium dog.

Under the window behind Sergeant Bloch was a table. At first Peter thought the table had been covered with a dark cloth, but as his eyes adjusted he could see that the table was actually covered with a mound of dirt. The earth had been carefully molded into a miniature complete with tunnels and miniature roadways, small plastic jeeps, tanks and GI figures made of molded green plastic like Peter had played with as a kid.

“Do you know where Arnie is?”

“When a soldier doesn’t obey the rules, he not only makes it hard on himself but on everyone else in the Company,” Bloch began.

Peter started to speak when Bloch held up his hand.

“Let me finish.” Stepping over to the table, Bloch reached down and began to aimlessly roll one of the small jeeps back and forth over the rutted roadway tracks. Leave it to stern and creepy Bloch to still be playing with Army men while actually in the Army, Peter thought.

“So that soldier needs reeducation, needs to get back to basics. He needs to learn to respect authority and discipline.”

“Cut the crap, Bloch. Where’s Arnie?” Peter said as he stepped to the table and grabbed the Sergeant’s arm.

“I believe we can all be good soldiers, Corporal Jenkins. Here.” Bloch picked up one of the tiny figures on the hillside of dirt and handed it to Peter. “Go on, look at it.” Peter stared at the tiny figure in his hand while Bloch lifted something else from the table.

Opening his palm, Peter looked at the piece of plastic colored Army green. It was just like any of the hundreds he had lost or melted in the sun with a magnifying glass. Closing his fingers around the toy, he lifted his arm to slam it back against Bloch’s chest but was stopped by the Sergeant shooting his hand out and grabbing Peter’s wrist, holding it tightly.

“Say,” he began in a low, harsh voice, “this private had a problem with drugs and I was his Commander. I would have to discipline him, make him know who was in charge.” Bloch’s voice dropped even lower as he stepped closer to Peter. “I suggest you take a close look before you throw him.”