Not Your Typical Angel

Not your typical angel and rebel without a cause, RJ gets in trouble after his last appointment with his usual tattooist, William. The unfinished tattoo has a strange effect on him. Binding him to William in some magical way. William needs time to mourn the lost of his boyfriend, Matt, but he’s no longer alone. RJ is more than he seems, with a reason for everything he does in life. An angel’s life is not an easy one. Will these two ever see the happiness and freedom they seek? 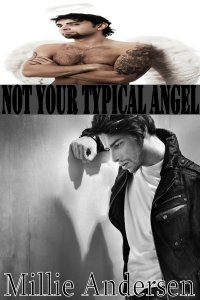 Not Your Typical Angel

RJ sat in the tattooist’s office, his arm at the mercy of William, the artist tattooing a two headed monster on his skin. Normally, he would admire the man’s artistic ways but today, his ink work awoke a serious uneasiness and empathy for the man who had materialized all his tattoos. Instead of feeling a mixture of pleasure and pain, he felt like he was stabbed a million times by the sadness and troubles of the artist. William’s life practically flashed before his eyes and a tear rolled down his cheek. Before his wings could spring out of his body, RJ had to interrupt him.
“Stop!” RJ briskly ordered. He looked at him with hurt and struggled to say every word. “Damn, you’re hurting me. Stop!”
“I’m almost finished with this baby, RJ. I don’t want you to have to come back again. Besides, I’m not hurting you, I’ve been doing this for awhile now and you haven’t complained until now.”
It’s true, he’s been doing the same thing for awhile but this is already getting out of hand. I thought I could take this like a man, but it’s more than the ink itself. He’s tattooing himself in my flesh. At this thought, RJ felt his skin crawl. “I said stop! So you better stop! Now!” he screamed and sobbed, forcing his hand out.