In 'Object of Art' Ally agrees to be turned into a living statue by her lover Marcus, for an intimate art exhibition. Ally has never revealed her curvy body like this before, but finds the experience of being bound by strips of material and plaster of Paris exciting.

During the show Ally heats up both from the effects of the plaster on her skin and the attentions of the art critics. She begs to be released, and finds the group more than willing to help. 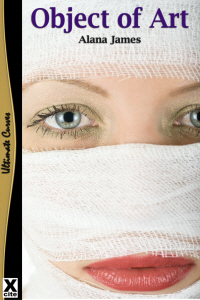