The world turns and the dragon catches its own tail.

Jan Xu, now alpha and leader of the Xu clan, faces more challenges when a past misadventure rears its head and threatens to tear her life apart. Added to this is a revelation about her role in her pack, which can make or break her, or potentially help her defeat an old foe, if she managed to hold onto her sanity.

Desperate to protect her family as her world turns obsidian, Jan is thrust in the midst of conflict between vampire, wolf, dragon and Singapore's Myriad. What can one do when the past won't let go? 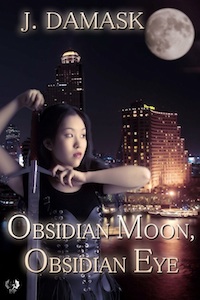 I passed morning joggers and hikers who mopped their brows with towels, my nose wrinkling at the plethora of smells. The forest scents were rich too, redolent of loam, sap and earth, interlaced with oxygen. It was a piece of the Forest, though not the actual Forest. Following the cues--sensory and visual--I made my way up, my legs experiencing the delicious aches of exercise. Along the way, I could sense the spirits who watched me, the guardians of the hill alert to any visitor to their domain. At the same time, macaque monkeys chattered and swung from tree to tree. They too watched my progress up the path. A wolf in human form was always worth keeping note of. Predator, they hissed, predator. Beware!

The familiar cistern greeted me. I dipped my hands into the cold water and washed my face. Silently I cleared the debris in and around the moss-covered receptacle. The water shimmered, clear and sweet to the tongue. I placed the fallen leaves and twigs next to the shrubs, noticing more piles. Someone else had cleaned it. There were subtle changes. Almost invisible to the naked eye was a small porcelain statue of the Virgin Mary, framed by green moss and lichen, half-covered with algae. Silvery trinkets hung in the nooks of branches. My other senses informed me of presences. A fox had wandered this way. So had a couple of fey. And oh, a duende had paused a few moments in front of the statue in silent prayer.

The energy around the spring pulsated. Clean, like the clarity of the moon. Gentle to the skin, yet piercing through the bones in a good way. It was wholesome, kept fresh by the constant rhythms of fresh air, earth and sap.

I cupped a handful of water and sipped it. I remembered other, happier times, when I was younger and idealistic. When the landscape was less complicated...

A gaggle of young women jogged past, reeking of stale Chanel and perspiration. They stopped for a while and pointed at the spring before they made a racket down the muddy path. The spirits sighed with relief when the women left. Humans could be so noisy.

I rested and allowed the peace and tranquility of the place to enfold me. Not my own beloved grove, but any forest would do.

A twinkle among the interlaced leaves, a sparkle catching the sunlight, projected rainbow arcs across the foliage. I stood to investigate.

It was a pendant, probably left behind by a supplicant. I stared hard at it.

A wintry chill hit my back and cascaded down my spine. I had seen similar at the mental institution.

It swayed in the breeze, a gentle oscillation. No, it was just a Buddhist amulet, done in the Tibetan fashion. Why did I see a black dragon?

Why a black dragon?

The joy I’d felt earlier evaporated. A distinct whisper of fear in the air chittered like hissing laughter. The spirits bunched together and I could hear their silent snarls. Macaques hooted. Alarm calls. The trees rustled, prelude to a storm. Invisible storm.

A roar...or an echo of a roar--throbbed. Then the smell. Reptilian, vile, pungent like a crocodile pit complete with rotting meat. I growled aloud.

A cyclonic force struck me squarely in the chest. I staggered back and fell hard on my butt. The reptilian smell became a stench; this time, I caught hints of the sea. Ocean. An ocean filled with weird and unmentionable creatures. Fetid, fetid, fetid...