On A Cold Winter's Night 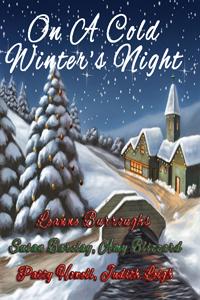 On A Cold Winter's Night

On a cold winter nightor any night in the year

snuggle up and enjoy five delightful stories designed to put you in the Christmas spirit.

The Black Friday stock market crash of 1929 turns the world on its heels. Mark Donovan loses his job and returns to the farm he'd turned his back on so many years before.

Last Christmas, life was in perfect order for Dr. Elle Hennessy. But within one year, her life has been turned upside down by a broken engagement and a startling discovery.

Unwilling to ruin her family's holiday cheer, Elle finds herself turning to Dr. Philip Wagner, her former fianc, during her time of need when he extends a helping hand. With Philip standing faithfully by her side, the flames of love that had grown dim are rekindled and burning brightly once again. But is Elle strong enough to believe in the power of Christmas miracles and give their relationship another chance?

Stormy weather delayed baggage claims on Elizabeth Rawlings' return flight to Tallahassee. A double latte sounds like the perfect time killer. The crowded coffee shop necessitates sharing a table where she receives a jolt stronger than the lightning outside.

Aaron Blake noticed Beth in the luggage return area. Now here she was, asking to share his table. The high school sweetheart he'd never forgotten, or stopped loving. Can a chance meeting turn out to be a lifetime connection?

Archer Webster, a psychologist accused of stalking, seeks a top-notch defense lawyer to represent him. Referred to the firm of Adams & Adams, he finds himself having to decide who's the craziest: the woman accusing him or the attorney defending him.

Burned from a previous case, Noah Adams accepts only female clientele. When Archer Webster seeks representation by her legal firm, she uses her male given name to her advantage. Or so she thinks. She soon learns the difficulty and embarrassment of straightening out a relationship begun on a lie.

Can love at first sight overcome the hurdles of lies, deception, and trickery?

Annika's life is full and satisfying. She owns and operates her own restaurant, teaches cooking classes at the local college, and develops recipes in her few spare moments.  Even though her mamma longs for a son-in-law, who has time for a man? Enter a dark-haired, blue-eyed man, whose worldly-wise taste buds expand her appreciation for ethnic food, and whose kisses leave her wanting more. How did she ever live without him?

But when Joel's hidden secret comes to light, Annika's hopes for the future come crashing down. Will she recover? Is it possible to trust again? And can she face this Christmas alone?