Only Comes Once A Year

...Only Comes Once A Year – Kitti Bernetti

Have you ever wondered what it might be like to be the fairy on top of the Christmas tree, with all the characters down below peeping up your skirt? The wooden flautist knows how to play his instrument all right... and what's Father Christmas hiding behind that beard and his red hot clothes?

Are you naughty or nice? Jenna's never had much opportunity to find out before her friend Beth persuades her into a steamy Christmas break on Fantasia Island. And Christmas has never been so sexy, as Jenna's own personal secret Santa shows her just what she deserves...

Freya and Carrie love each other, but that doesn't mean they don't love men too. And sexy Tom next door is the perfect man for this perfect couple. The thing is – what will it take to make him acknowledge that they're his perfect Christmas present?

Vanesssa has never spent a Christmas away from home before. And Australian Christmases, complete with sun and sand, are very different to the ones she's used to. But when Vanessa's friend Sonja invites her over for Christmas Eve, Vanessa discovers just how good "different" can be!

The Scent of Pine – Victoria Blisse

Having the in-laws stay over the Christmas season puts a definite dampener on Julie and Robert's sex life. But abstinence has its own rewards after Christmas: – there's barely time to wave off the relatives before the sexy couple make up for lost time... 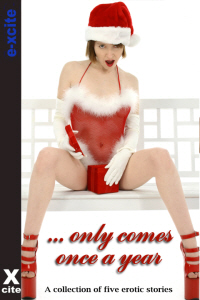 Only Comes Once A Year

Me next,’ she thought, ‘me next,’ as she watched the silver star and the coloured glass balls unwrapped and placed on the tree. Her minute china heart fluttered inside her breast. Finally, the woman unwrapped the tissue from Fairy Sparkle’s body and smoothed out her tutu and wings. It was as much as the fairy could do not to squirm with pleasure. The champagne had made its way to her ballet shoes and she felt quite fruity. She might even, when it was dark and the people had gone to bed, climb down the branches and visit the soldier with his nice red uniform and long tin whistle …
There. There she was finally, on top of the tree. Mistress of all she surveyed. She looked down. The soldier stared up her skirt. Beneath her she saw Santa Claus in his sleigh. He looked up and grinned. His smile was full and generous and his eyes twinkled. Shame about the white hair and beer belly. He was surrounded by tiny packages wrapped in shiny jewel-coloured paper. Two reindeer munched contentedly on pine needles when the people weren’t looking. They certainly weren’t looking now thought Fairy Sparkles as she watched them collapse on the floor in front of the fire.
They lay on the sheepskin rug and kissed. Fairy Sparkles was intrigued how hard they kissed, she could see the woman’s lipstick smeered across the man’s chin. Unbelievably, he took a swig of champagne from the glass, held it in his mouth and kissed the woman again without swallowing it. The woman gulped, swallowing his champagne, giggling as it trickled down her face and round her neck. Greedily, the man lapped it up and Fairy Sparkles found her wings trembling as she looked at the man’s tongue explore the woman’s ear. Fairy Sparkles stared wide-eyed. Were the others watching? She looked down and saw that every decoration’s eyes were glued to the floorshow before them. The only exception was the bear whose paws were clamped firmly over his eyes.
Then, the man picked up a chocolate liqueur cherry between his teeth and tried to say something like, ‘d’you know where I’d like to put this?’ except the last word came out as thish. The woman couldn’t stop laughing, pressed her hands coyly against her skirt and said in a husky voice, ‘I think I can.’ Without further encouragement, the man disappeared under her skirt, and started bobbing up and down. The woman squealed unconvincingly ‘No, you mustn’t,’ as his muffled voice said, ‘Mmm, this is the most delightful cherry I have ever tasted. Whoops, I’ve lost it. No, there it is again, there it is. And this one’s even better. Mmmmm this one’s tastier, I’m going to have another nibble.’
Without warning everything went silent. The man’s head bobbed faster and faster now, the woman’s legs spreadeagled in the firelight. The decorations stared open-mouthed as they saw the woman claw the rug, sinking her red finger nails into its curls. ‘Oh God,’ she whimpered, ‘oh God, no, yes, no. I’m nearly there, nearly there. Don’t stop, don’t stop,’ she was yelling now, and her crimson high heels dug into the rug as she grabbed the man’s bobbing head. ‘Nearly there,’ her voice sounded strangled as she let out a yell, followed by a moan, then a long satisfied sigh. As the man emerged, mouth covered in chocolate, the woman looked him in the eye. Then she shot off and ran up the stairs. ‘Don’t you run away,’ cried the man, ‘it’s my turn now.’
‘You’ve got to catch me,’ whooped the woman and the man disappeared up the stairs after her, laughing.