Ashley Torrington never cared much about Christmas before. But this year she’s having a particularly blue holiday because Marine Special Operations Team member, Nick Turner got under her skin just before he was deployed to Afghanistan. With her neighbors’ precocious daughter Bella volunteering Ashley for a special project at school, and a mysterious white-haired stranger named Estelle in town buying gifts from Ashley’s shop, not to mention the odd assortment of presents Ashley’s been receiving from an anonymous source, she shouldn’t have time to worry about her guy. But when he and his team go missing the week before Christmas, she realizes only a Christmas miracle will reunite them. Captain Nicholas Turner never backed down from challenges—on the battlefield or in his personal life. But he’d never met a challenge like Ashley, who doesn't want to be anyone’s “girl back home.” Now he’s on the other side of the world, wanting to be anywhere but in Afghanistan for Christmas. About to embark on one of the most dangerous missions of his life, he needs Ashley to know she’s much more than the girl he’d left behind, and he does plan to come home to her. But in the meantime, a little Christmas magic would be appreciated. Little does he know, he’s about to get his wish. 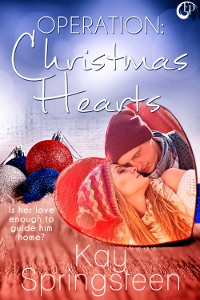 What an intriguing idea. She shifted the letter aside to find the paper she’d retrieved from the floor was a heart crudely cut from red construction paper. In the awkward printing of a child just learning how to write, the heading Wish List was scrawled across the top followed by a long list of requests from deployed troops. Magazines, electronic games, DVDs, books, MP3 players. Ashley smiled at the fairly typical Christmas list that might have been created by the average American teenager. But as she read further down, her heart began to break. Baby wipes, good razors, new socks, individual snack packs, hard candy. Simple items that she could grab at the pharmacy up the street. Things she took for granted.
Ashley glanced at the letter again and found herself smiling, well aware that her unofficially adopted niece, Bella, was a member of Mrs. Minton’s class. No doubt she was behind this invitation, and her mother, Trish, would certainly have been recruited, as well.
“Bellie, Bellie… what are you getting me into?” Ashley tapped the edge of the heart against her chin. “Still, it could be fun.”
Dropping the invitation on top of the bills on her desk, Ashley grinned. Then she executed a pirouette not quite as well as she had done when she was ten years old, in Mrs. Johnson’s ballet class, but it was still fun to dance across her living room floor. Nick had called, and she had something to do to alleviate the boredom of the off season. Not a half-bad day.
She twirled once more, catching sight of herself in the mirror on the inside of her apartment door. Her colorful hair reminded her of Nick’s request for a picture, and her pleasure deepened. It really had been a simple request and one she could easily comply with. Dinner could wait.
She raced back to her bedroom and yanked open her top dresser drawer then dug through the summer tank tops until she found both pieces of the bikini she sought. With its swirls of sapphire blending into emerald, it nearly matched the blue and green in her hair. Was she really going to do this? She must be crazy for even thinking about it. A delicious shiver of anticipation rushed her system. Yep, she was going to do it. She’d give Nicholas the pinup picture he’d requested.
After slipping out of the sweats and stepping into the bikini bottom, Ashley was pleased to discover the garment still fit. She preened in front of the mirror. It looked pretty good too. These days, just a stray pound or two meant the difference between merely still fitting and actually looking good. As she tied the halter top of her bikini, a gentle smile tugged at the corners of her mouth. She’d been wearing this same bikini the day she’d met Captain Nicholas Turner. It had been the first day of May, surprisingly warm after a wet and rainy April…

In the Line of Fire (MFMMM)
Dixie Lynn Dwyer
In Shelf
$4.99
Tweets by
sirenbookstrand