Demure Adelaide hides a passionate nature beneath her elegant gowns. After hiring new maid Daisy, she’s eager to introduce her to the delights of the orchid house. Enjoying Sapphic romps and determined to resist paternal pressure to marry businessman Thomas, Adelaide is surprised to find excitement in his touch and his whispered promises. Yet, when he reveals his sinister side, she seeks familiar solace.

Christmas brings snowflakes, also a vivid reminder of a heart-wrenching past. Intrigue and obsession rock this Victorian household as Adelaide’s poignant search for love leads her into storms. Will she ever bask in the sunshine? 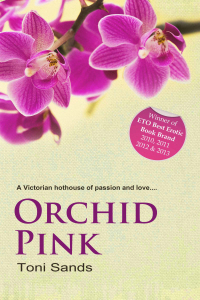 "Orchid Pink is a fascinating and complex romance with many surprising revelations. The sex scenes are deliciously steamy as Adelaide explores her sensual side first with Daisy and then with Thomas following their marriage. With well developed characters, a unique storyline and a few unexpected twists and turns Toni Sands fully engages the reader in this compelling novel of romance and life in the Victorian Era." - Book Reviews and More by Kathy

"But what I enjoyed above all about this novel was the deep, literary flavour of it and the sensitivity with which it described subtle nuances of feeling. It is a thoroughly enjoyable novel, packed with surprising observations from an author steeped in the pleasures of reading and the evocative power of words." - Vanessa Wu

That night I undressed, fantasising Daisy’s fingers loosening my buttons and stays. My nipples hardened under this imaginary touch. I refused to acknowledge the danger of employing someone so capable of melting my willpower. I’d conducted my personal life with discretion, avoiding tittle-tattle, but now my longing for tenderness and laughter swamped my common sense like a deluge from a watering can. She was inexperienced for the post of lady’s maid but I could coach her, talk to her of books and society scandals. Show her pretty things. Even if I didn’t frequent front rooms and foyers, I read plenty of newspapers and periodicals.

I turned back sheet and coverlet and climbed into bed. Daisy Pook had invaded my senses and I was too alert for sleep. In my bedside drawer was something to help, something to which I tried not to resort too often. My very first lover had attempted to teach me to applaud my body’s needs. But my upbringing was a tight corset and though Ruth Carroll had loosened the stays, I still felt I was beguiled by the devil’s violin.

But now it was Daisy, her hair no less bright, dancing through my thoughts. No man had ever courted me. The thought of masculine hands fondling me where once Ruth’s fingers had lingered was … what? Abhorrent? Certainly untried.

I felt safer, fantasising about Daisy. But I shouldn’t allow myself to wonder whether or not she enjoyed the attentions of fellows or females. I mustn’t risk frightening her away. I knew this conflict between conscience and craving heralded storms. Had I made too reckless a decision?