Other Worlds, Other Universes

In “Decision,” Adam Cavanaugh wants to become a published writer and a spaceman. Who is the man who tells him otherwise?

In “The Door,” Tyler Jones Grant is determined to open it. When he manages to do so the unexpected happens to him.

“Forever Love” tells the story of Willy’s love for Janice and Janice’s love for Willy. But when Willy becomes an Android what does Janice do?

“Homecoming” is about Star Pilot Carter Rogers landing back on Earth after being gone for many years.

In “All that Glitters,” Spider and McIntyre were certain they would become rich when they landed on the asteroid of pure gold.

“The Visitors.” A Trainie and a Superior landed on their food supply world for a discussion.

“Where Is That Asteroid?” Gar Ragan and Sam Jockowich search for an uncharted asteroid named Sexsema.

“Opus One Thousand Outwits the Devil.” When Opus dies he doesn’t go up, he goes down to outwit the devil.

In “Looky Loos on the Moon,” Earth has had the ultimate war. What is left of the human race migrates to the domes on the Moon. Suicide is rampant among the survivors.

“Who Or What is Abby?” There isn’t anything Abby cannot do. She is called upon to meet with frog-like aliens from outer space who want to buy Earth’s junk. The question arises as to what the aliens consider to be junk. It’s up to Abby to find out. 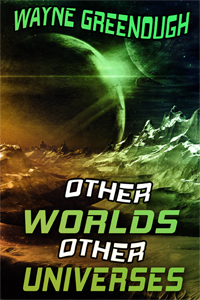 Other Worlds, Other Universes

The starship descended Earthward. She had seen many worlds, traveled the star-ways, a lonely piece of beautiful metal, sophisticated computers, electronic equipment and countless miles of wiring. She had kissed the universe and been generously pelted with stardust.