Out of the Mouth of Tenants

Most of you may have lived in an apartment at one time or another or you may know someone who presently lives in an apartment. You may have heard stories about tenants and stories, or complaints they give to their landlords.

My name is Krista Callie, author of this book, and I am a property manager for an apartment complex in the Midwest United States.

During the years of my managing the apartment complex, I have had tenants from all walks of life come into my office and ask some of the most outlandish questions or make equally outlandish complaints.

I chronicled these incidents I have come across and formed them into a book. If you live or have lived in apartment, you may see yourself in one of these situations. I assure you I am not making fun of these renters and the stories they feed me. We are all human and sometimes put ourselves in situations that we later laugh at ourselves for getting into in the first place. 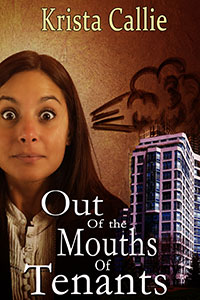 Out of the Mouth of Tenants

Moving into a new apartment can be stressful for anybody... filling out the paper work at the office, packing up, then moving in, etc. Therefore, it is understandable why a property manager has to face some incidents regarding new tenants.

Matt, a new tenant phoned and left a message for me to return his call. He said, “If she can’t get through to me, then my new number hasn’t been connected yet.”

I phoned him later on and asked him what he was using to talk to me with? Did he have another phone?

He said, no, that he was talking to me on that phone.

I told him, “Then I assume the phone is operating since, you called me on it.”

Excedrin headache 340 coming up, and that just happens to be the number of tenants in the complex.

This same renter also complained that there was not a double-cylinder deadbolt on his door. We made that change. A few days later, we were going to need to come to his unit to program his alarm. He said it would be okay to come in, that he would probably be sleeping with his bedroom door closed. He would have his keys hanging in the door so he wasn’t sure if that was going to be a problem with us putting the key in the other side to come in. I reminded him that that is the purpose of the double cylinder deadbolt was so someone cannot break the glass and get in.

As Ricky Ricardo use to say to his wife Lucy in the classic I Love Lucy show, Ahhh yah yah yah

He also was very worried about water coming into his unit. He had had a bad experience with a former upstairs neighbor who left a fish tank running, causing water to leak through his ceiling and drip on his couch. He asked if the tenants upstairs had a fish tank. I told him I didn’t know. Two days later, there was a big leak in the unit upstairs when the renter disconnected a washing machine. Fortunately, it did not affect his unit. We were afraid when he saw the plumber at this unit, he would freak out, knowing there was a water problem so close to him.