No pressure. No diamond.

Burlesque performer Charlie Summer is on a mission.

She and her two best friends, known collectively as the “Bling Brigade”, are taking their act on tour in the Australian Outback.

The aim is to raise funds for their own burlesque academy, so they can empower other women with confidence-building dance classes.

But their striptease skills won’t, in fact, be the only thing funding the school . . . along the way they’ll be thieving jewels!

Reporter Liam Chasewater finds himself in the Outback when he’s down to his last chance. After screwing things up in love and at work, he’s lost joint custody of his two-year-old daughter.

If he gets his next magazine assignment right — following the troupe on tour — he’ll get his life back on track.

What Liam doesn’t count on is sparks flying between him and Charlie. Though hooking up with an exotic dancer and interviewee, with suspicion wafting around her, won’t look good on his record . . . 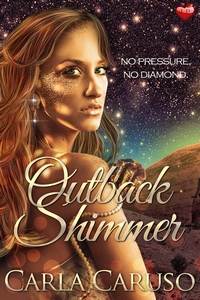 With Natalie Cole’s “Pink Cadillac” ringing in his head, Liam slid in beside Charlie and she roared off for the bakery. He should have guessed she’d be a lead-foot.

After choosing their desserts, they parked in a corrugated dirt road out of town, surrounded by farmland. The Cadillac’s long bonnet made a good spot for sitting on and eating their desserts, shaded by a tree. It was almost as good as making love there. Okay, that was a lie, but it was nice. Trying not to stare at Charlie’s endless tanned legs in her cut-offs, though, was a constant battle. She’d since lost the scarf, and her rose-gold hair spilled past her shoulders.

She took another bite of her chocolate salted caramel tart and unleashed an orgasmic sigh. Yeah, he was jealous of the pastry. “This tart is out-of-this-world.”

“Bet it doesn’t compare to this,” he teased, holding up the paper bag he was eating his raspberry cheesecake slice out of. “Anything with berries always reigns supreme.”

“No way,” Charlie exclaimed. “It’s anything caramel-style that rules. Or banana-flavoured. Trust me. Here, try this.” She turned to hover the tart near his lips, and he succumbed to a mouthful, enjoying the rush of sugar, salt, and wickedness.

Somehow the pastry reminded him of Charlie. He swallowed and feigned a so-so gesture with his hand. “It’s okay.”

She elbowed him in the side. “You are so lying.”

He grinned, the sun, sugar high and isolation lulling him into a false sense of security. “Hmm, maybe another taste would prove me wrong.”

She baulked. “Well, you’ll just have to lick the remnants off my lips. No way am I giving away any more.”

His throat dried up. “If you insist.”

He was like a junkie, useless in the face of another hit. Chucking aside his paper bag, he leant to push up her shades, then pressed his mouth against hers, sucking on her bottom lip. He felt her smile. Soon her tongue was tangoing with his, and his hands were skimming her sun-warmed curves. Enough heat was created between them to melt the Cadillac’s engine.

When they finally came up for air, he brushed a strand of hair from her face. “So, this is going to be more than a one-night thing then?”

She reclined back and picked up her tart again, ever nonchalant. “Seems like it.”

“They don’t need to know,” she cut him off. “They just think we’re good mates.” Even though it seemed incredible to him, considering all the chemistry zinging between them. Charlie pushed on. “Let’s keep this . . . uncomplicated. What happens in the Outback, stays in the Outback.”

Liam’s shoulders loosened. This could remain their dirty little secret. Only Charlie and his conscience needed to know. He didn’t have to go completely cold turkey from her, after all. “Sounds good to me.”

Charlie glanced sideways at him. “I know you’ve got stuff to sort out back home, a real life to get back to. As do I.”