Outside the XY: Queer Black and Brown Masculinity is an anthology of more than 50 stories, memories, poems, ideas, essays and letters--all examining what it looks like, feels like, and is like to inhabit masculinity outside of cisgendered manhood as people of color in the world. Read these passionate, complex autobiographical glimpses into the many layers of identity as the authors offer olive branches to old and new lovers.

This anthology is designed to be uplifting, as it considers and explores our masculine identities as non cis-gendered males, or those traditionally born with the "XY" chromosome. It is a radical act of self-love and affirmation. Outside the XY is a labor of love. 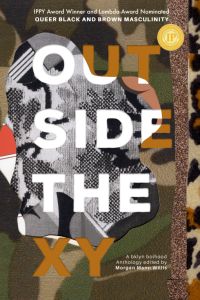 “First, my hair. The older woman TSA agent puts on rubber gloves the way a urologist might when examining male genitalia. She pats down the top of my dreads, then lifts up the back of my hair and feels my shoulders, the base of my neck. Then, the older man TSA agent steps in. “What is your last name?”, he says. Here, they want to see how my voice sounds, it doesn’t really matter what my last name is, all that matters is what timbre comes out. In this particular incident it is March and I’m getting over a cold. My voice is a bit gruff and deeper than usual. When addressing strangers though, I deepen my voice. That’s just what it is.

Both agents look at each other, then at me in the style of Three Stooges-era slapstick comedy. “… and your first name?” the woman is thoroughly confused. Here, they want to know if my first name denotes a gender; if I am perhaps an Ann, Rebecca, Jessica, or maybe a Benjamin, Phillip, Robert. “Taylor,” a smug look comes across my face. Not the answer they hoped for. I’ve always been proud of my name for its indecisiveness, it’s staunchly ungendered nature. This is the point when the TSA agents must decide which one of them will pat me down. The man moves closer to me.

“I’m going to pat you down now…” his voice gives in on the last word, a slight inflection like maybe he meant to say it as a question but wants to seem certain in his decision.

There is something to be said here about security and freedom and fear and physical contact with strangers in America, but that will come later. This part is about happiness, about feeling secure in falling out of gender.”
-T. Johnson