'Pants on Fire' by Sommer Marsden

Michelle loves the first warm day of spring. She teases her husband Marc by telling him that warm weather gives him a craving to grill food on the barbecue. Is this true? When he touches her exposed skin, both of them heat up, and they can't resist each other. Does Marc tell the truth about what he wants? Does Michelle know him as well as she thinks she does? They both reveal themselves to be liars, but finding the truth is always a pleasure.

Sandy can't resist the cowboy boots that her man Bradley's sister brought back for him from Texas. Bradley won't wear them and they are too large for Sandy, but when she sells them on e-Bay, she discovers boots in many styles and sizes, and buys a sexy pair of black leather boots for herself. The boots bring out a new side of Sandy, and Bradley learns that he likes being ridden.

'On the Carpet' by Cathy King

When Neve starts work at the carpet warehouse, she meets Fran, her well-built co-worker, and the two male owners, James and Ben. When a buyer from a department store insists on speaking to "the lovely Fran," Neve goes looking for her and is shocked to find her on all fours on one of the carpets, being pounded by James while Ben fills her mouth. Beverley, the supervisor and James's sister, has suspicions. She tells Neve to help Fran count stock to find some missing carpets, but Fran has other ideas. Neve soon willingly joins Fran in her sexy games with the owners, and she learns how new carpets can be ruined. It's only a matter of time before the secret comes out.

Canada is a vast country, but the female narrator decides to travel across it, east to west, after graduating from high school. On one unforgettable night in a youth hostel in St. John's, Newfoundland, she watches her Canadian roommate Robert show an English visitor, Brenda, what he can do. The narrator touches herself as she watches, and all three enjoy the new experience.

'Spanked to Her Senses' by Jim Baker

Alistair Dawson is a successful man in Australia, but his wife Sue was bitterly disappointed to learn about his affair with Dominique, a worldly Frenchwoman. Desperate to save her marriage, Sue arranges a holiday for herself, Alistair and their seventeen-year-old son. On the plane, Sue can't help remembering Steve, the man she met in a bar after discovering Alistair's affair. Sue had never forgotten being spanked once by a boyfriend, and when she asked Steve to spank her, the experience was as thrilling as she remembered. When Alistair gets a message from Dominique, Sue decides to stop trying to patch up her marriage for the sake of her son. She chooses what she wants. 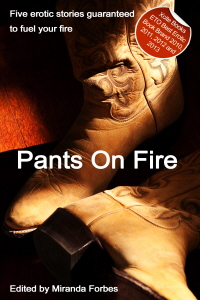 It’s the first warm day of the year. Something about that first really warm day always makes me feel sexy. Ready to shed clothes and show some skin. Even if that skin is pale from months of sweaters and jeans. But I like to bask in the sun on the first warm day. Marc likes to grill.
The skirt is new. The panties are small. Flip-flops on my feet and painted toenails. A short-sleeved deep v-neck tee and I’m in heaven. I want to feel the wind on my face and my skin. Smell the fresh-cut grass. The neighborhood is alive with the sounds of lawnmowers and week whackers. I listen to my thongs as I walk and I can’t help but laugh.
Thwack, thwack…thwack twhack…
The sounds of spring.
“Chicken. I’m thinking chicken with barbeque sauce. Green beans. You can steam those inside and maybe some fresh bread.” His handsome face is hopeful and alive and glowing from being kissed by the sun. It seems like we haven’t seen the sun in months.
“Why is it that your head always turns to food when the weather turns?” I laugh.
“Michelle, need to know that man make fire. Man make fire then man make food,” he grunts at me and when I pass him, he smacks my ass hard and I let out a little yelp.
“Hands to yourself,” I snort and lower myself onto the chaise longue. I stretch my long legs out and sigh with happiness. I’ll let them get just a touch of sun and then I’ll coat myself in SPF 45 from head to toe.
“Why? You’re gonna prance around in that … what is that? Is that scrap of denim supposed to be a skirt?”
I laugh again and close my eyes. In a moment he’ll be back to food and fire.
“And a deep v. See how deep that v is. It makes me want to stick my face between your tits.”
I’m smiling, eyes still closed, but his banter is making me wet. Between my legs a nice steady moist pulse has begun. “Hmmm,” I say, noncommittally.
“You’ve painted your toenails. Let’s see. What should we call that colour.”
‘Sweet Wine’
“Vixen red. That’s it. That colour is most certainly meant to seduce men with spring fever. And then the flip-flops. Well, might I say, nothing like long toes and elegant feet.”
I almost laugh again but it dies in my throat because now he is caressing my foot and the feeling of his hand on me shoots straight to my center. Someone touching my feet has never been a big turn on but now, all of a sudden, it is staggering in its sensuality. His hand circles my ankle, gripping me, and just stays there. My skin feels like it’s circled with fire where his skin is touching my skin. The sun that was just warm a few moments before is now a searing heat and I feel my skin flush but I shiver.
“And then we have your legs,” he goes on.
“The same legs I’ve always had,” I attempt to tease, but my voice is taut and my cunt is thumping and my nipples have pebbled against my blouse. What I really want to do is moan, not tease.
“The same legs I have been obsessed with all these years,” he teases back but his voice is much more in control than mine. He releases my ankle and his hands are sliding up the insides of my thighs. I twitch under the pressure. He reaches the hem of my short skirt and stops, fingers splayed up under the fabric. So close to my panties. So close to the part of me that wants him the most. He stops. Right there. And lets his hands rest innocently on my skin. My mouth is dry and my pulse is pounding in my ears.
“You’re stopping?” I whisper.
“All I’m interested in is food, remember?” His deep throaty laugh fills my ears. I keep my eyes closed because if I see that evil smile I just might die of frustration.
“True. Mostly.”
“Am I interested in food. Or am I interested in eating?”
That gets me. Right there. My breath freezes in my throat. “We’d have to go inside.”
“Now why would we go inside on a lovely day like this.”
A little pool of my own hot moisture escapes me and my panties are sticking to my clit. I would do anything to have them off me at that moment. To let the warm spring breeze blow over my naked sex.