Paradigm Shift: A History of The Three Principles

This is a brief history in three parts of a new paradigm understanding called The Three Principles, and its dissemination, which was uncovered by Sydney Banks in the 1970s and very gradually and silently crept into the consciousness of perhaps hundreds of thousands of people, touching and changing lives worldwide.
It all began when one man, Sydney Banks, in one moment of time, had a profound experience of spiritual enlightenment. A small circle of people gathered around him on Salt Spring Island, British Columbia to listen to his wisdom. Within a few years two mental health professionals became profoundly touched by Syd's teachings, among them George Pransky. Part I of this book is an extensive interview with Dr. Pransky, who began to create an entirely new, inside-out psychological paradigm.
It began to spread little by little, one person at a time, solidly through individual insights and slowly began to infiltrate the fields of mental health, prevention, corrections, business, education, coaching and many more. It began to spread around the world. Part II is a historical chronology of what transpired. Part III consists of brief write-ups of a few of the important historical events that for an extended period of time changed mainstream systems.
How difficult it must have been to create an entirely new psychology from the formless, spiritual nature of which Syd Banks spoke, and for which he, himself, even struggled to find words! Furthermore, this became a completely new psychology--a true paradigm shift to the inside-out--which flew in the face of the traditional psychology accepted not only by the powers that be but by millions of people around the world who studied it and practice it. And all this from one man's enlightenment experience in one moment of time, which gradually rippled out affecting one person at a time, who then affected others, then others, changing lives along the way, and it still grows on into unimaginable futures.

About the Author:
Jack Pransky, Ph.D. is founder/director of the Center for Inside-Out Understanding and an internationally recognized trainer, coach, counselor and consultant who since 1992 has been studying and teaching "The Three Principles," an inside-out, spiritually-based model and approach. Dr. Pransky authored the books, Somebody Should Have Told Us! (2011/2006); Prevention from the Inside-Out (2003); Prevention: The Critical Need (2001/1991); Parenting from the Heart (2012/2000/1997); Modello: A Story of Hope for the Inner City and Beyond (2011/1998), and co-authored What Is a Thought? (A Thought is A Lot) children’s book and Healthy Thinking/Feeling/Doing from the Inside-Out prevention curriculum for middle school students (2000). Jack has worked in the field of prevention since 1968 in a wide variety of capacities. In 2001 his book, Modello received the Martin Luther King Storyteller's Award for the book best exemplifying King's vision of "the beloved community," and in 2004 Jack won the Vermont Prevention Pioneer's Award. 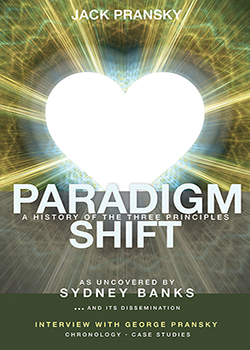 Paradigm Shift: A History of The Three Principles