Hotel Arensen has something of a reputation. It is famous for many things, its grandeur, it’s a beautiful island setting, but more than anything, it is famous for sex. Every room is geared towards getting the staff and guests 'better acquainted', but Dominique isn't sure that even this sexual paradise can heal her shattered libido. That is, until she meets Sheldon who - quite literally - offers an arousing glimmer of light at the end of a dark tunnel... 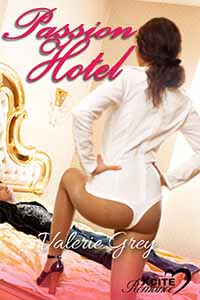 THE HOTEL ARENSEN sits atop a spacious island planted with formal gardens and hedgerow mazes, tall poplars and tangled strands of ancient oak. One view is more beautiful than the next, and the whole is a symphony of light and form and shadow. The island is connected to the shore of the lake by a macadam drive; when the sun slants low like this and the water burns red, the hotel and the island appear to be consumed by a lake of fire, attached to the mainland by a road of smoke. Where the drive connects with the island is a long causeway and at the end of this causeway are the statues of two angels, one on each side of the road; one looks towards the Hotel Arensen, the other looking away, so that one faces the traveller as he enters, and the other faces the guest as he leaves. Each angel holds a bronze sword, and in the light of the setting sun these swords appear to be aflame, just like the sword wielded by the angel who guarded the entrance to Eden. When entering the grounds, the one angel keeps the outside world at bay, and on leaving the hotel, the other angel keeps back all that has happened there. Within the hotel are hallways set with infinities of doors, marble stairs leading to hidden verandas, and dimly lit corridors set with lush carpets and hung with faded and obscure paintings. There are ballrooms and dining halls, a spa and pools for taking the waters (in ancient times there were Roman baths here), and although the grounds and hotel are impeccably kept, there is a feeling that time has passed this place by; or rather that time has a different meaning here, measured not by the passage of the seasons, but by the continuity of human habitation. The hotel has assumed a kind of seamless grandeur with the landscape in which it sits, rather like a queen sitting in state over an empty kingdom. This is the sight that Dominique sees as she alights in front of the hotel from the limousine that has brought her from the station: the marble steps that sweep up to the portico, the parade of Palladian windows gleaming in the dull light, punctuating the ancient facade of the building with a calm and stately rhythm, the ornamental statuary overgrown with spots of ancient moss. She is slim, with large brown eyes and blonde hair, impeccably dressed in a simple white suit; from her placid appearance there is nothing to suggest that she's a fragile shell, that inside she's still tender and bruised, wounded by the bitter finish of a marriage.