Beautiful young Irish horsewoman Caitlin Cleary wanted to be a jockey but knew it wasn’t possible for a woman in the early 20th century. Being the wife of a horse breeder was a fitting compromise, and when she met and fell in love with wealthy American Charlie Kendall, a novice thoroughbred breeder, she accepted his proposal. When he invited her ambitious social climbing brother Eamonn to teach him the ropes, and accompany him to Pinecroft, his estate deep in the mysterious New Jersey Pine Barrens, her joy was complete.

Pinecroft, as Caitlin was destined to learn, was a house of many dark, perverse secrets that threatened the fabric of her marriage. Could she brush them aside and concentrate on the establishment of a successful thoroughbred horse farm, even after her brother Eamonn almost brought her bright hopes to an end? 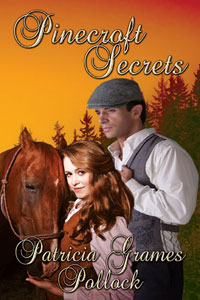 Caitlin Driscoll Cleary has never wanted anything more than be a jockey, but the times are not favorable to the wishful dreams of a young lady. When Caitlin falls into Charles Larrabee Kendall, he knows she is the one. Caitlin finds herself falling for Charles and when he offers marriage, she agrees and finds her new home filled with secrets that could destroy their future.

Nostalgically written and filled with beautiful insight into the turn of the century. Caitlin tells her story with a dynamic flair and her love for horses and Charlie comes through on each page. An intriguing story that will bring smiles to readers. Reviewed by Emily - Catanetwork.

“Was Grania a good horsewoman?” Charlie asked me a bit absently.

“Perhaps. But sailing was her forte, and she captained galleys. She was said to be stout by both heart and nature, or words to that effect.” Just then, I was relatively indifferent to the various tales and legends surrounding Grania, but enough was known of her for me to reflect that she would not have stood for any man’s shilly-shallying.

Neither, I abruptly decided, was I.

I opened my mouth to ask him what his intentions were after having tied most of my summer up when he suddenly took both my hands and silenced me with his eyes.

“How soon can we be married?” he asked in the same tone he had just used when inquiring about Grania’s prowess with a horse.

“To hell, Mr. Kendall from Americy, I was wondering when you were going to ask me that,” I retorted rather tartly.

“I was ready to ask you in Newmarket, but I wanted you to be very, very sure about it,” he told me.

“Ach,” I murmured, sounding Irish because of the deep emotion I was experiencing, “you’ve read and studied me like a catechism all these weeks. You knew I was sure.”

“Just as you’ve known from the beginning that I love you. Now say it to me,” he urged, drawing me to him so tightly that I could scarcely breathe.

“Manim asthee hu,” was what came out. I had never had it said to me nor said it to another person, and I really hadn’t known I was going to say it to him. It came from the depths of my Celtic roots, and though he didn’t understand it intellectually, emotionally he did, for he trembled, and his voice shook when he asked me softly to translate it so that his mind would understand as well as his heart.

“My soul is within you,” I told him simply, and so it was and always would be.

We were as close in that magical moment on that legend-filled island as two people whose bodies had not yet melded could be, closer even, perhaps in a mystical sense, earth-shatteringly close.

A kiss would have been too commonplace, yet some intimacy must be exchanged, something tender, a sort of consecration, a prelude to the physical intimacies being hoarded for the marriage bed.

Yes, something was called for, so he unpinned the golden braid I had wound around my head and worked his fingers through its glossy thickness till it was released and transformed into a bright, waving mantel covering my narrow shoulders and back. Then he caressed it lovingly, making me thank God I had always resisted the impulse to cut it.

We were both trembling as he drew me to the blanket, and soon our hearts were out-beating the pounding surf.

He kissed my forehead and eyelids before our lips blended. My blouse buttoned down the back, but I pulled it up from the restraining waistband of my skirt and let him finagle with my light ruffled camisole. I had not worn a corset. I never wore them if I could avoid it, as I’ve said. Arousal had long since transformed my firm nipples into pink pearls, and when his exploring tongue made its sensuous discovery of them, I thought the heat of my passion would surely melt us both.