Play With Me by Dakota Rebel

How often do you watch an onstage sex scene and wonder what’s really going on beneath the sheets? It’s the last night of the play, and it’s time to find out for sure.

Merrilee and the PM by Eleanor Powell

That’s “Private Message,” not Prime Minister. The Prime Minister would never be caught on a website called Spanking Swingers. Would he?

The Nerd Herd by Sommer Marsden

Her computer’s on the blink but she doesn’t especially care. She’ll use the repairman’s hard drive instead.

As down and dirty as you like, Sparkie and Folly take red on a journey she never dreamed of completing, and all without leaving the safety of her home. 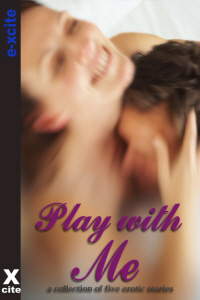 “Alright people.” Cisco, the director had been frantically running around backstage, shoving cast members out of his way, screaming at the make-up and wardrobe girls, and basically being a gigantic asshole since the curtain had gone up on our final show. “This is it you two.” He pointed at Tony and I who had been trying like hell to stay out of his way all night. “Your final show, the last nude scene of the play. I want it believable, you need to sell it to these people. I want people walking out of here wondering if you were actually fucking under those sheets tonight. I want the whole town talking about you two tomorrow. Got it?”
“Got it,” we said together.
I looked at Tony who just grinned at me. We were both wearing robes, but within minutes we would walk naked onto the stage, meet at the bed and crawl under the sheets where his ‘sock’ was waiting. But I would still be uncovered and open to him.
It had been embarrassing for me the first few times, we were allowed to at least wear underwear during rehearsal, but when I had been naked and under him … well it may be harder for a man to hide his arousal but there are signs for a woman as well. I had been terrified he would smell how wet the feel of him against me had made my pussy. Or that on the few occasions his cloth clad dick brushed me that it would become soaked with my juices. Luckily, if he ever noticed he hadn’t said. And the more we did the scene, the more relaxed I became with him. Oh, I still got wet when he was on me, but there were times I got wet around him fully dressed so there was nothing I could do about that anyway.
The lights backstage dimmed a few times, announcing that our scene was coming up. I took a deep breath and dropped the robe, turning to watch Tony do the same next to me. He grinned at me then kissed my forehead.
“You’ll be great. Don’t worry. And after tonight you’ll never have to deal with my accidental erections again.”
I watched him walk away, stunned into silence by his words. I had never noticed him getting hard for me before. I must have been too preoccupied with my own situation. Damn, it would have been nice to know before tonight that he had been turned on by the scene as well.
I ran to the wings to take my mark, not wanting to miss the cue on closing night and face the wrath that was Cisco for it. I caught Tony wink at me from across the stage and the music started. We walked onto the stage, meeting in the centre where he took my hands in his and stared down into my eyes.
“Ramona,” he said, his voice more hoarse than I had ever noticed before. “Tonight you will be mine, I will take you to my bed and I will mark you as my equal, my love, my Queen.”
“Raul,” I said, noticing that my voice had a shake to it tonight. “Tonight I will take you inside me as I have done a hundred times before. But this time let it be the beginning of our forever.”
OK, so the dialogue sucked. I hadn’t taken the part to impress anyone, I just needed a few more credits on my resume before I headed off for New York. I was hoping that the play, even though Tony was in it, would be far enough off the map that it wouldn’t come back to haunt me later.
We climbed into the bed with Tony crawling over me as he had done so many times before. He reached between us, I assumed to find the sock that was hidden there, but I had to stifle a gasp when his finger played up the slit of my pussy instead. He met my eyes with a small smile and I returned it, wondering what he was doing but not wanting to ruin the scene.
I could feel the familiar wetness between my legs, but this time I did notice that Tony was aroused too. His cock had grown full and hard against my thigh, his pre-cum burning on my skin where it trailed when he moved.
Fortunately the scene had no lines, just a few sighs and moans where we felt appropriate. When his finger started to make hard circles over my clit I knew that I would never have remembered any words if I’d had to say them anyway.
I felt him slide something down his cock and sighed, thinking he had put the sock on and was done messing with me for the night. I thought it had probably just been closing night antics, something I had been warned about from other cast members with more stage acting experience.
So I was shocked when he dropped down to whisper in my ear.
“Don’t worry, I brought a condom.”