Preachin' to the Choir

Jonathan could do nothing to stop his wife’s losing battle with cancer. With twenty years into the ministry, he can't believe the Lord would leave him with both an empty nest and empty spot on the other side of the bed.

Kat, music teacher and mother of grown twins, feels settled in small-town Texas. Life may be dull, but it's predictable, unlike her life with her late husband. Kat concludes a happy, committed relationship with a male is impossible, so she makes peace with herself. If nuns can live celibate, why can't she?

One Sunday, Jonathan spies a golden beam of light descending upon Kat while she’s directing the choir. Why hasn’t he noticed how beautiful she was before? From here on out, Jonathan knows he’ll be preachin’ to the choir, but will Kat—and his congregation and their children—let him? 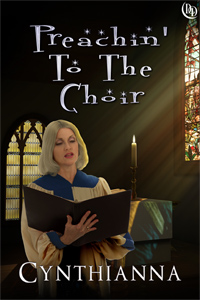 Preachin' to the Choir

A powerful swell of organ music cloaked Jonathan Rawlins in an invisible curtain of solitude as he stepped into the pulpit. These past few Sundays felt different. In his over twenty years in the ministry, he couldn’t once remember experiencing such an unsettling awareness while conducting a worship service, including his first faltering attempts fresh out of the seminary. Here it was again, that odd feeling of restlessness permeating his soul. He tried to shake it off, but it clung to him like grit on a screen window after a dust storm.

The members of his flock lifted their encouraging faces and fixed their gazes upon his, waiting with polite expectation for his sermon to commence. He had been blessed today, as the lessons were relatively straightforward. He began by re-reading a part of the Old Testament passage:

“From Ecclesiastes, fourth chapter: Two are better than one, because they have a good return for their work: if one falls down, his friend can help him up. But pity the man who falls and has no one to help him up! Also, if two lie down together, they will keep warm. But how can one keep warm alone? Though one may be overpowered, two can defend themselves. A cord of three strands is not quickly broken…”

Jonathan’s voice faded away. He cleared his throat once, twice, but still the words were trapped. His vocal battery had died and needed a jump. He reached under the pulpit and found the small glass of ice water one of the altar guild ladies always placed on the hidden shelf for just such an occasion and took a long, cool sip.

The tension in his throat immediately relaxed, but the mental roadblock remained—anxious seconds ticked by slowly. Jonathan put the glass away and glanced over his page of notes, desperate to push his stalled vehicle of a sermon back on the open road.

What was he going to talk about this morning? Oh, yes, the significance of the three strands. What did the three strands represent? The first stood for the Lord, the second for himself, and the third strand? The third strand of his own cord had been cut this past winter. Jonathan’s cord had unraveled as he’d laid to rest his wife of twenty-five years in the cold, rocky earth of the Texas Hill County.

A dull, familiar ache pierced his heart. Jonathan turned to the front left pew for strength. It had been Ruth’s favorite spot. Recently dear Aunt Mabel, as everyone called his biggest cheerleader in the congregation, had occupied the seat, but this week Aunt Mabel was in the hospital mending from a hip operation. The empty spot taunted him.

Jonathan curled his fingers into tight fists at his sides. Frustration blossomed faster than bluebonnets beside the highway after a spring shower. What could he say? Where could he go? Who could he turn to?

He took a deep breath and cleared his throat again, praying for inspiration. Just when all seemed lost, something in the corner of his eye caught Jonathan’s attention. His gaze wandered from the left side of the sanctuary to the right and rested on the choir loft. A sense of peace and strength flooded his frame as he focused on the familiar figure seated front row center—St. Luke’s new choir director, Kat Dubcek.

Kat raised both her hands in a thumbs-up motion. Her radiant blue-gray eyes and infectious grin lightened the burden Jonathan had been carrying for the past five months. His confidence soared. Smiling his approval, he returned to his sermon notes.

The next fifteen minutes sped by in a glorious blur. With the last “Amen” Jonathan knew he had done it. He had preached his sermon and had been graced with many thoughtful smiles in return. Both relief and anticipation surged through his veins. He could do this. He could still be a pastor to his flock—

And all because Kat Dubcek had indicated he could.

Returning to his chair, Jonathan raised his hymnal high, observing Kat as she took her place to direct the choir’s offertory selection. Raising her arms wide in a welcoming gesture, the choir members rose to their feet. She prompted Gayle at the organ to begin with a discreet nod, then turned her full attention to their performance.

At first it seemed an ordinary enough beginning to an ordinary song, but then the miraculous happened. A sudden burst of sunlight filtered through the narrow, jewel-toned stained-glass windows above the choir loft, bathing Kat in a heavenly glow.

Jonathan shivered. He scanned the sanctuary to see how his congregation was reacting to such a miraculous display of light and color, but no one appeared to notice this extraordinary phenomenon.

Doesn’t anyone else see it?

He contemplated the glorious halo of light that encompassed Kat’s ash-blonde hair, streaking it with iridescent flashes of spun silver. The creamy white of her choir robe had taken on a stunning brightness, the like of which hadn’t been seen since Christ’s appearance on the Mount of Transfiguration. There could be no other explanation for it—an angel had lighted upon the earth and taken up residence in St. Luke’s choir loft.

Kat’s strong alto floated above the organ in distinct counter to the melody, its harmony blending beautifully with the handful of other voices. Her mellow tone resonated with a rich and sensual quality, enrapturing him. He sat transfixed, captivated. Her misty-blue eyes were sparkling sapphires. Her full lips burned red as if kissed by the same purifying coal that had touched the prophet Isaiah’s. Her skin glowed alabaster, as smooth and soft as a dove’s breast.