Following the directions of a mysterious, all-knowing dowager, H G (Hope Grace) Wells and Doctor Peter Rhodes (from The Institute) break out two male prisoners from jail and together with an investigative reporter, her female companion, and a tough, no-nonsense female detective (all five from The Program) take them back in time from 2018 Melbourne to their 1898 London.

H G is the younger cousin of the famed author H. G. Wells – the other H G as she calls him - and the foremost physicist of the late Victorian era. Their mission, with the aid of their contemporary companions from Melbourne, to rescue Peter’s kidnapped wife Samantha.

This leads to an incredible, dangerous, and at times brutal story of abductions, rescue, time travel, savagery, love, romance and dematerialisations involving characters such as Jack the Ripper and Robert the Bruce, as H G and her companions travel along their predestined paths. This strange and at times mystical tale is weaved together by a new and improved space/time machine called the DEMAT, designed by H G and her great friend, the abducted woman Mrs. Samantha Rhodes, who, like H G, is a brilliant physicist.

All five time travellers from the twenty-first century are fated to fulfil their own, individual destinies, while at the same time unwittingly ensuring certain historical events take place along the way. Their journeys, along with that of H G’s, dictated to by the written instructions of the mysterious dowager. 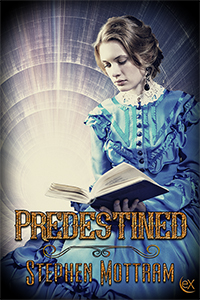 Hope Grace Wells—H G to her friends—sat beside Samantha Rhodes, her best friend and colleague, as they strapped themselves into the machine. They wore their bonnets and gloves, determined to present themselves immaculately for when, and if, they arrived at their destination.

Samantha looked across the pod nervously. “This is it, H G, the culmination of our dreams.”

With her usual determination, H G displayed no such nerves. “It will work. Of this, I have no doubt.” She had good reason to feel confident. Her mentor and guide, a veiled, secretive dowager had said it would, and up until then, the woman had been faultless in her predictions.

Peter Rhodes, Samantha’s devoted husband, leant across and embraced her. “I am so proud of you, my love. See you shortly.” He then faced H G with a serious expression. “I hope you are right about this, this woman means everything to me.”

H G scoffed. “Stop worrying. We’ll be back shortly. Are you ready for your task?”

“I am.” He stepped back and moved toward the generator switch as H G pulled down the transparent capsule of the machine, enclosing them both inside.

H G knew what they were about to do was highly speculative and extremely dangerous, despite their most rigorous preparations. They were sitting in the prototype of their time-travelling machine, and it was hooked up to the strongest electric generator of their age. But even more importantly, a giant lightning rod was about to be raised into the sky above their building. They were in the midst of a fierce electrical storm, as planned, which would give their machine a boost of energy from a thunderbolt that should launch them into the future. How far into the future was the great unknown, but hopefully they would arrive at a time where a much more powerful energy source than electricity would be available.

Theoretically, the prototype could only move forward in time, but not in space. This meant that no matter what year they travelled to, they would always arrive at the same place, the Rhodes’s mansion. However, with a far greater energy source, they believed they had the technical know-how to construct a space-time machine that could take them to whenever and wherever they wanted. That was their aim, their reason for their venture into the future. And if all went well, they would return within a few minutes, sitting together inside their brand-new machine.

They were taking a huge risk, though. They had never actually tested the machine. How could they, without the added lightning bolt? Consequently, they had no idea whether it would work or how far it would take them, or indeed if they would ever be able to return—and even more importantly, if they could actually survive the event.

H G considered herself a lady well ahead of her time. Her family had lacked the funds to send her to Oxford, but as a brilliant student, and due to her academic achievements, she had been granted a full scholarship. She had had her choice of courses but rather than choosing Law or Literature—subjects better suited to someone of your gender as suggested by the all-male panel who had selected her—she had chosen physics.

That was how she had come to meet her best friend, the much-loved champion Oxford athlete, Samantha Rhodes—the only other female studying physics at Oxford at that time. Samantha was more a mathematician than a physicist, H G the reverse. They often put their minds together with their studies, both of them complementary to rather than competing against the other.

Shorter than Samantha, and of medium build with auburn hair and what she considered handsome rather than pretty features, H G treated herself—and her gender—very seriously. Like her friend, she favoured the collar and tie and tailored look of her time. But unlike Samantha, who was a fashion plate, H G viewed her attire as a statement of the rising power of modern womanhood. Her brain was as clever as any man’s, and she was determined to prove it.

She and Samantha had maintained their strong friendship after Oxford, with H G residing and working on her various projects in a converted outbuilding at the Rhodes’s mansion. The two of them, along with Samantha’s husband, Peter, spent many interesting evenings together discussing all types of hypotheses that were emerging at that dynamic time in the world’s history. Their favourite of which was time travel.

Samantha had chosen a separate career path than H G. As a stunning beauty and already reasonably famous as the best female athlete ever at Oxford—as quoted by the London Times sports editor—she had chosen a public profile, packing out auditoria throughout the United Kingdom with her lectures on the possibility of time travel. She was an outstanding public speaker, so with her good looks and high profile, her manager had experienced no trouble filling the various assembly rooms, due to the high public interest in her subject matter. Samantha, already a rich woman through her family’s and her husband’s wealth, was becoming famous talking about her and H G’s favourite subject.

H G, on the other hand, had continued her studies and work, with Peter and Samantha not only setting her up at their home but also sponsoring her. Their financial support gave her access to all the relevant scientific knowledge and materials she needed to work full time on her passion, the invention of a time machine.