A BOY BORN TO BE KING:

Arthur has no idea of who is father is, only that he must fight--when he's not chasing women--to save Britain from the Saxons.

A GIRL DESTINED TO BE QUEEN:

Fiercely independent, Gwenhwyfar is determined to rule Cameliard free of any man's yoke.

Lancelot's strength in battle equals Arthur's, as does his prowess in bed...a competition that will one day determine the destiny and fate of Camelot. 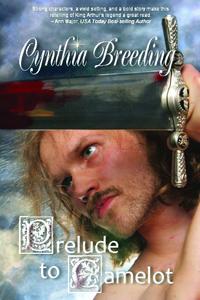 "He'll be all right, won't he?" Arthur asked Nimue as he watched her stuffing the wound on Lancer's thigh with moldy bread. When the medics had brought Lancer home he was already delirious with high fever. Even now, two days later, he was still only semi-conscious.

Nimue wrapped his leg, taking care not to disturb the sheet that covered his loins. Arthur smiled a little at her modesty, knowing Lancer wasn't the least bit inhibited.

She looked up at Arthur now, her aquamarine eyes bright and clear and Arthur felt like he was swimming in the warm waters off Lyonesse. Not all priestesses took vows of chastity; why did Nimue have to?

"I think the fever is breaking," she said as she applied a cool cloth and wiped the sweat from Lancer's chest. "I'll make a poultice of echinacea and marigold once the infection is drawn out." She laid a hand on his forehead and her brow furrowed. "He keeps dreaming of this woman with copper hair."

Arthur was startled, and then he remembered that Nimue had the Sight. "His dream lady. She really exists?" he asked.

"Oh, yes." Her frown went deeper. "But she will bring much sorrow."

Arthur laughed then. "Are you telling me there's a woman who will refuse Lancer?" Nimue looked at him with troubled eyes and he sobered. "What is it?"

"She will not be able to refuse him. Somehow, though, I think the sorrow will come to you."

Arthur stared at her and then shrugged. "I doubt a woman could come between us. We wouldn't let her."