For every young lady must be in want of a sturdy pig spear.

Lady Victoria is serving as hostess for the Harvest Dance in Barrow’s Heath. All is well under the full moon, until the roast pig careens around the ballroom not quite dead. Faced with a terrorized village and fainting mother, our young miss fights off the plague of zombie pigs in order to reach the safety of her betrothed's manor. However, Lord Attleby is far more interested in his brandy than assisting the tiny town. Victoria must gather together a band of pig-slaying villagers in order to save their home and to salvage her future. 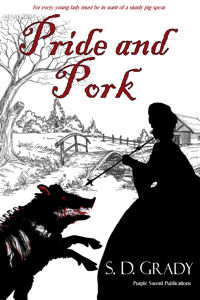 Another squeal interrupted the celebrants. Some people turned around, seeking the source.

She ran toward the pantry, her mother pushing past her into the hallway and slamming the door. From behind came a great crashing and more squeals.

Celia leaned against the wall, fanning her blotchy face and pointed at the door. "It's...it's the roasting pig. It wasn't quite dead."

The shattering of crockery combined with surreal growls and oinks. Perhaps that really hadn't been her stomach after all…Victoria shook her head. "Nonsense, mother. I saw the pig turning on the spit. It was most definitely deceased."

Celia sank to the floor in an ignominious heap of skirts, gasping for air. "I'm sure it wasn't."

Victoria eyed the door, but stepped back when it rattled in its frame. Some large creature was loose in the pantry—that was for certain. "Where's Henry?"

"Remember? He went back to the manor to deal with the rest of the pigs."

Some of the revelers were beginning to collect in the hall, curious about the commotion and asked, "Did one of 'em run all the way here?"

Victoria nodded, crouching down to soothe her mother's brow. "That must be it. One of the pigs from the estate is in the pantry. We'll just leave it in there until Henry returns. It is a pity about the cakes." She studied her mother's ashen face. "Are you all right?"

Just then, the pantry door shattered. Something heavy and stinking of burnt flesh pushed Victoria into her mother. A sharp hoof scraped her leg before the beast bounded off down the hall into the ballroom. Pushing her blonde curls out of her eyes, Victoria spied what looked like a crisped tail disappear around the corner, and a roasted apple rolled along the base of the wall.

And then the villagers started screaming in earnest.

"Mother, I'm sorry I doubted you."

"Whatever shall we do?"

Pandemonium erupted. Victoria considered for a moment climbing into her mother's lap for safety, but stood up and shook out her skirts. She held out her hand. "Come along, Mother. We'll go out the pantry door and return to the manor. We'll send for help as soon as may be. Somebody needs to come down here and shoot that creature."

Celia stood, groaning and rubbing at her scratched arm. "Yes, I'm sure the men in there can handle one burnt pig."

Victoria craned her neck to get a view of the chaos ensuing on the floor. The Harvest Queen dance had devolved into a greased pig chase. The pig had apparently been cooked long enough to crisp its skin, leaving fat to drip down its little legs. Men slipped and skidded, reaching for the manic creature while the ladies climbed over one another in an attempt to reach high ground. The band played on.