The subject of priests or ministers as sex partners with other men is one of the more taboo subjects in the writing of erotica. Habu has tackled this theme in gay male writing before, though, so naturally, as a publisher, we urged him to gather some of the stories in a subject-specific anthology, which has resulted in Priest Play. We gleaned nearly a dozen previously published stories that included priests at sex play from habu’s various anthologies, and, in addition to these, he wrote five new, never-before-published stories to make up a fifteen-story anthology in which the clergy is given dispensation to indulge itself in man sex.

The anthology is split in two sections—stories with historical settings and contemporary stories. Included are works in which a priest is only included among the men engaged in sex, like “24 Exeter Place” and the “Debatables”—and do so without the slightest remorse—and stories that focus on the perplexity of being a priest and still desiring and needing sex with other men, such as the concluding stories “Senegal Surrender,” “Fitting In,” and “Banishment.”

As with all of his anthologies, with Priest Play, habu takes an unusual theme and provides stories for his audience that are varied in setting, inventive in plot, human in characterization, and hot in male-on-male sex. If you are looking for a fix for your fetish to have a priest in your bed, this is the anthology for you. 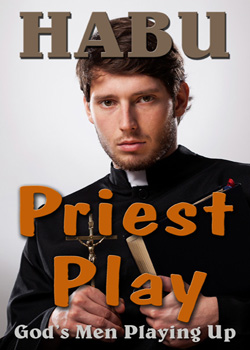 From “Carnival at Viareggio”

“You? You live here? I took you for a fellow tourist,” Hugo said. “Your accent. I thought—”

“That I was an American, right?”

“Yes, I confess I did think that.”

“I am, as a matter of fact. But a displaced one. I am Martin Biddle, and I have an antique store here on the Piazza Puccini, not far from the Grand Hotel.” He briefly looked away from Eric swimming in the sea to shake Hugo’s hand and then looked back. “My family thought it safer for their reputation for me to live abroad,” he added.

Hugo didn’t pursue this point, but he did register it in his mind. He turned his head and took another look at the young man. He was quite handsome. Trim, but with good musculature. And obviously sophisticated and refined—and well to do, as he was expensively dressed, if overdressed for the seaside. And perhaps knowing now that he lived in Viareggio explained why he was fully dressed. It was unusually warm for the beginning of March in Tuscany, but that was all relative. It was warm enough for bathing wear for the likes of Hugo and Dr. Mueller and the English nobleman at this time of year—and even for the sixty-year-old, gaunt French priest, who was, to use a pun, sticking to his habit—but it likely would still be too cold for the beach for a local inhabitant.

Eric came out of the water but remained on the hard sand at the water’s edge. He was, indeed, a beautiful young man. Short, but trim with a boyish body that, nonetheless, had good torso definition and strong looking arms and legs, as he would have to have to have been swimming as strongly and expertly as he had been. He was Germanic, light blond, with striking blue eyes, and a dazzling smile when he wasn’t looking shy and withdrawn into himself—or aloof to the scrutiny he obviously knew he was being given from the line of umbrellas.

A sigh went up from the cluster of men sitting around the Von Stobens as Eric unbuttoned the straps on the shoulder of his form-fitting one-piece swim suit and let the top of the suit drop to reveal his smooth, both boyish and well-muscled torso. Seemingly entirely blind to the multiple sets of eyes capturing and mentally caressing his form from the line of umbrellas, he reached down and readjusted his genitals inside his swim suit—to the intake of breath by more than one man under the umbrellas—the priest’s sigh was audible—and started doing stretch exercises again to step down from the vigorous swim in the sea—and then a few mild calisthenics.