Even as the old king of Aram is dying, the Oracle at Noto is giving the Watchman the prophecy that the king’s progeny will rule as high kings of all of the disparate nations of the region, even unifying the volatile island of Li’ under one ruler as it had been in the time of the ancients. This prophecy gave the old king the peace he sought before he died. The stumbling block in this prophecy is that his heir, Cletar, is besotted with catamites and will not lay with a woman. At the gate of the castle is a siege army under the command of King Zara of the kingdom of Akamantis on the nearby island of Li’. The king’s ancient adviser, the Watchman, devises a plan, which unfolds over decades, to fulfill the prophecy of the oracle even as King Zara and the dying king’s four advisers are, each for his own reason, determined that the oracle’s prophecy will never come to pass. 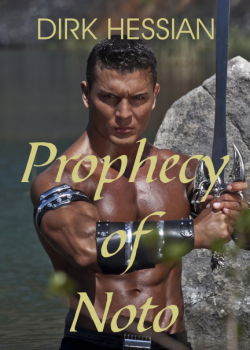 “What do we do now?” Cleus asked, with a weary sadness in his voice. “We cannot stay here. Others will follow these.”

“And what of Maia?” Toma asked.

A good sign of Toma’s basic character, the Watchman thought, as he looked down at the young, alluring Nubian, trying to hide in his eyes the lust he felt in his body. Toma had thought of the young maiden in the village on the other side of the ridge, the woman Toma had been lying with for some months.

“Do I tell him she is with child—and that it is a son?” the Watchman asked himself. But then he thought it not wise. But it was a good thing for he himself to know. A very good thing indeed.

“We must endure even more hardships now than before,” the Watchman said, trying to couch his voice in regret, although, now that it was happening, he was anxious to get back onto the journey of the fulfillment of the prophecy. “If you truly love your Maia, Toma, do you want to put her through those trials?”

Toma thought hard, and the Watchman thought that the tears forming at the corner of his eyes were a charming aspect of the young man who was stirring him inside so now.

“No. No, I suppose not,” Toma answered at length. “But the thought of never seeing her again—”

“You will see her again, Toma. I promise you that. You will be with Maia again. She could not be safer anywhere else.”

The Watchman looked with a love of his own into the eyes of what was now his conquest. What he said was true, but only he knew how hard the road would be for Toma from this time to that.