A multi-sexual story of Love and identity.

Savannah’s Pulaski Square becomes home, in this novella of sexual expression and repression of all persuasions, to a tight-knit community of artistic, searching, and sensual residents in the shadow of the Savannah College of Art and Design.

April is said to be the month of fools, and the bed hopping and mix of desires brings this thought to the fore in the April setting of this story when one of the square’s most beloved members is revealed to be in straits that require immediate, very expensive, and life-threatening medical intervention. Can the likes of a transvestite drag queen, a pair of once-married Georgia First Family patrician novelists whose foreboding mansions face each other across the square, the feuding half siblings of a philandering father, a newly arrived hopelessly mismatched couple, a pair of lesbian college students, a sexually repressed but about-to-explode librarian, a nearly invisible hero, and the square’s black bull gardener come together as a community to meet some other need than the question of whose bed they will be in that night? 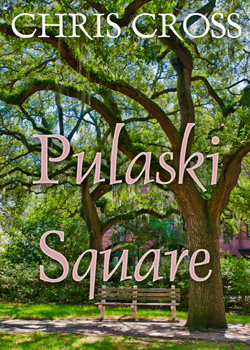 Where did this euphoria come from? How could I repress it? Should I even try to repress it? It just wasn’t working with Mark. I had tried a whole new venue and he continued to drift away from me. Our families couldn’t remain blind to it forever. Why should I continue being the martyr just to live our families’ dream?

I was waiting for her on a bench in Pulaski Square, facing the Casimir Inn. I couldn’t help it, I was trembling from the anticipation of the meeting. I didn’t know where we’d go, but it had to be someplace private—just for the two of us. And it had to have a bed. But that was silly, a sofa, a chair, even the hard floor would do. She’d already shown me she could give me an orgasm standing up against the wall with her pressing her body to mine and making creative use of her fingers.
But there was nowhere here in the square. I briefly thought of the bushes—but then laughed, when I thought of Caleb Freeman finding us. He was always working on the flower beds and on trimming the bushes in the square. Wouldn’t that be something? For that big, black stud to find Tracy and me rolling around in the bushes. He’d probably offer to do us both right there. . . .

But as fate would have it, just as Kathy arrived, all rosy cheeked and smiles—now having a hairstyle that matched mine in style and color—so also arrived an ambulance, its siren screeching and its lights flashing.

It stopped in front of the Casimir Inn. Two EMTs rushed into the hotel, leaving another one to open the back of the ambulance and pull out a mobile gurney, which the EMT rolled up the handicapped ramp to the hotel’s front door and then inside.

Kathy and I clutched at each other, transfixed, holding our breaths for the brief moments it took for the gurney to reappear. The young black hotel porter, Jaivon Johnson, was walking beside it. The hotel manager, Martin Lewis, was standing in the hotel doorway, looking worried and at a loss as to what to do next.

“It’s Muriel Roberts,” Kathy said. “I knew it would come to this. I think I need to go with them.”

“Muriel Roberts?” I repeated, dumbfounded, lost. “You need to go with the ambulance?”

“Yes. It’s her kidneys. I’m a registered nurse. Worked in ERs before deciding I wanted to be a photographer and enrolling at SCAD. Muriel didn’t want others to know. But she knows I’m a nurse. I’ve been doing what I can.”

“Of course,” I answered. “If they let you go with her, do so, by all means. If nothing else, you’ll have answers to questions they’ll have. And she’ll be comforted that you’re there.”

“You’re a doll. But then I already knew that. I know every square inch of you.”

Chills of pleasure ran up my spine as I watched her hustle across the square and to the ambulance. The stretcher already was inside and Jaivon had climbed into the back of the ambulance as well. Martin Lewis was still standing at the hotel door, stunned and wringing his hands. Kathy talked with the EMTs briefly and then, with a look back at me and—I was stunned too—with an air kiss, she was in the ambulance and it was pulling away, its siren once more screaming across the square.
To no one in particular, I said in a small voice, “Yes, go. Do what you can, Kathy. We have eternity, and who knows how long Mrs. Roberts has?”

It struck me then that I’d crossed the river, made my decision. I wouldn’t make other living arrangements immediately, but my arrangements with Mark had to change. I felt a flood of relief. If I’d read the glances that had gone between Mark and Terrence Rowland in the café the other day, I’d have to say that Mark was at the same place I was.

Good. That made what was to come all the more bearable—for both of us. I did love Mark—just not in the way our families wanted me to.