Quiet, timid Hannah Williams has spent most of her life shying away from anything too personal. When her supervisor, Jenny Anderson, betrayed her to the satanic cult she’s part of, Hannah’s peaceful life is shattered. Trapped by black magic in the body of Jenny, Hannah must race to reverse the spell and reclaim her body.

Kev Anderson is a man living a nightmare. When his wife returns from an assignment at Hartford Mansion, he has no idea just how things are about to change. With the real Jennifer Anderson trapped within a mirror, her hold is broken. Free of her control, Kev’s first impulse is to run far and fast, but something just doesn’t add up.

Sweet and caring, the woman he calls his wife acts like another—a woman he could love. When Kev learns the truth of his wife’s deceit, he’s thrown into a world of darkness and murder, of power and control, all the while trying to save Hannah and himself from Jenny’s evilness and the Devilen clan.

Together, they must vanquish the evil surrounding them and save not only themselves but the trapped souls locked within the walls of a mansion of death. 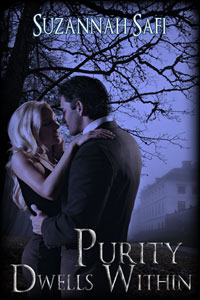 Outside, the chill of the night hit her heated cheeks with the impact of a thousand tiny needles. Shivers raced along her flesh, whether from the cold or not, she didn’t know, or care. Her open sweater flapped in the breeze as she topped the knoll. Her breath coming in harsh, grating pants, she turned one last time and stared at the dark mansion. “Jenny,” she whispered. Tears formed, blurring her vision and stinging her eyes, and the hot scald of tears streaked down the contours of her ice-cold cheeks.

“I’ll come back, I promise.” Hannah turned, her shoulders hunched against the cold. Her mind was a tangled web of thoughts, with only one solidifying as she trudged toward the path that led back to the car. She had to call someone, the police, or Jenny’s husband—someone. But who would believe her?

Dazed, her breathing ragged, the crunching of dried leaves under her feet the only sound that broke the silence, Hannah trudged forward, holding her bag tight against her chest. Leaving Jenny in that awful mansion unsettled her further. Guilt reared its head to go with the terror that still shook her frame.

The silver moon cast mysterious shadows through the woods around her. Watching the shadows dance, her mind replayed every scary movie she used to watch. Hannah paused, studying the now-deserted cafeteria. All the lights were out, the windows reflecting the moonlight. Darkness wrapped around the looming shadow of the building itself. Hannah shivered, the sense of loneliness reached through her and squeezed her heart.

She walked past the cafeteria to turn down a rutted dirt road. At the time, Jenny had said it was a good idea since they would come back in the daylight with other visitors roaming around. Never in her wildest dreams had she thought she would head to the car, alone, terrified and in the dark. I hate the dark, and this situation, and Jenny for dragging me into it. Hannah sniffled. Happy thoughts. Yes. Hannah nodded, her hands pressed to her mouth to keep the hysterical laughter from spewing forth. She needed happy thoughts to calm her. Snuggled beneath a warm blanket, her two cats in her lap, she’d watched reruns of Lassie on television. Their warm bodies curled up by her knees in bed, the sounds of their purrs loud in the silence, a comforting sound as she fell asleep.

She hurried down the narrow dirt trail. Head bent, arms wrapped tightly around what remained of the tattered bag she’d grabbed and tucked under her arm, she trotted forward.

The soft breeze picked up, moaning and twisting the branches that rasped together. Eerie and uncomfortable, the sound induced a wave of chills that coursed down her spine.

Shaking, her fingers tightened around her sweater, clinging to the weak, invisible shield it offered. Guilt, remorse, and pain tangled within her as she sniffled again. She’d left Jenny back there, alone, terrified, and with that—that monster.

But what could she have done? Hannah couldn’t comprehend what had happened. No one would take her words as truth. The low throb behind her temple sent waves of agony radiating outward. The chirping of crickets, the croak of frogs filled the deserted woods. Slithering creatures glided over the dried leaves that littered the ground. The sound of footsteps grew in volume, hiding the natural rhythm of the woods. Hannah stumbled, her gaze sweeping the trail.

A young boy stepped out of the shelter of the woods, dressed in worn shorts and a dark T-shirt. Silver dapples of light danced off his short black hair, dark obsidian eyes stood out in his pale face. He stood, silent, imposing, in the middle of the dirt road. His clothes aren’t proper for the weather, she thought. There isn’t a house within miles of the mansion. Besides, they don’t allow children on the tours because of the nature of the haunting. Her mind tripped over her thoughts.

“Have you seen my father?”

Steady, strong, and clear, there wasn’t a hint of the fear she’d expected a lost child to have. She stepped toward him until a half-smile crept over his face. Instinct, fear, she wasn’t certain, held her in place several paces from the boy. “No, are you lost?”

“Have you seen my father?” he repeated. Dark, cold, and vicious his eyes narrowed, tracing over her to rest at the throbbing pulse point beneath her chin. His strong, sure voice and smile were as out of place as he was.

“No!” she snapped. A small voice whispered discontent. Something in the way he looked at her raised warning flags. The situation didn’t feel right. A gut feeling told her to just keep on moving. Her heart lurched, suspicion clawing its way to the front of her mind. The flesh on her arms crawled at his penetrating stare. Hannah backed away from the boy before she turned and fled. Her feet pounded along the roadway, pausing only once to look over her shoulder.

She couldn’t see him behind her and shuddered at the worry that slammed into her. There had been nothing normal about that boy, she thought. What had he wanted? He wanted something, whatever he was.

An old man’s monotone from the corner of the dirt road startled her. Peppered hair, deep wrinkled flesh gleamed under the moonlight. Hawk-like, his stare went straight through her. Dressed in a long black cloak, his pale skin stretched over pronounced features. He stood on the edge of the road, staring at her with the same bottomless, ice-filled eyes as the boy. Stagnant, vacant, the look in his eyes left her with an aching sensation, much like a hole within her. With the empty sensation came the growing fear that she’d been trapped in a nightmare with no way to wake up.

She turned slowly and pointed to where she saw the kid behind along the road. “He’s back there,” she said. Just stay away from me.

He tilted his head to one side and a half-smile crept on his chapped lips. Or maybe she imagined it? With a final glance at the old man, Hannah darted away. Biting her lips, a quick prayer crossing them, Hannah concentrated on the dirt road. Every sense on full alert to the sound of footsteps behind her, she gulped in air. “Just a few more minutes to the car.” The mantra was carried away on the evening breeze.

Almost there, just keep on walking.