Quitting, Not an Option

If you want to discover who you are, who you are meant to be, and who God has called you to be, you cannot quit. In life, you will face opposition, but in the face of opposition, quitting is not an option. Do not quit! God has a plan for your life. You are valuable to Him and to those He has placed around you. He loves you and He wants you to succeed and win in life.
If you quit, you will never see the end of a matter. When you quit, you stop developing; you stop going forward; you stagnate. You stay the same year after year. If you quit, you will not reach your full potential. You will not reach your destination if you quit. You will not see what you could have or should have been.
In quitting, you not only forfeit your God given potential, you forfeit your opportunity to impact the lives of others. If you want to have an impact, you cannot give up. If you want to go where no one has ever been and do what others have not done, you cannot quit.

About the Author:
As a child, Gladys Cooper Goveia grew up without her biological mother. In fact, she didn't even know who her real mother was. She never experienced her mother's love, or received any advice from her. Instead, Gladys lived with a succession of aunts and uncles. Yes, that was hard. But she learned early in life not to make excuses, not to give up on life, and never to quit.
In the spring of 2004, Gladys was kicked out of college for the lack of $10,000. But, once again, she refused to give up. She believed God had a college degree waiting for her. Gladys believed that she would return to school. In the spring of 2008, she graduated with that degree.
In the fall of 2008, she entered Northeastern University for her master's degree. Were there financial obstacles? Yes. But she was determined not to quit. As a result, Gladys obtained her master's degree in 2010.
This book contains lessons in faith that she's learned and applied to her own life. She encourages you to take in these lessons, and build yourself up in your most holy faith. Never give up! 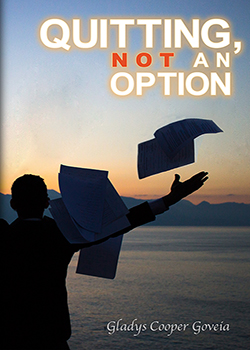 Quitting, Not an Option