Amy’s invisible lover must surely be a dream – or is he a ghost? Amy doesn’t care, since he gives her the best orgasms she’s ever experienced. The truth, though, is more sinister and more dangerous than she suspects. Amy must learn the secret of her lover’s nature – and of her own – before she loses everything. And, if the discovery involves more sizzling sex – Amy isn’t going to complain.

Be My Doll by Sandrine Lopez

Candice wants to get into Seb's pants but he is freaked out by the collection of dolls in her bedroom – especially one that looks like her ex Mark. Is there more to the mannequin that meets the eye? Yes, for Candice has found that certain magicks can be potent – and not entirely controllable – means of getting her way sexually...

The Room at the Top by J Smith

With frustrated longing she returns to the same hotel every year, booking the same room – the room at the top. Only she knows what is there and what will befall her, as dressed in lace of virginal white she lays back and prepares herself for the encounter. Each time it’s more than she could hope for and almost more than she can take, pushing her to the sexual limits of this world and the next.

Artist, Justine Templeton, undertakes a journey to her ancestral home, the Caribbean island of San Sebastian, in search of inspiration and meaning for her life. On the tropical isle, she encounters a shape-shifting spirit called a Duppy. In the form of a darkly handsome islander, the Duppy teaches her about the island’s tumultuous past and reveals a dark secret, coiled like a magical serpent among the roots of her own family tree.

Sure, the house was tiny and ancient, the roof as suspect as the plumbing, the basement cracked like the driveway. But it was Kathy’s. At last freed from the smothering constraints of the parental home, the socially inhibited 23-year-old could finally, truly spread her wings … Until she heard the chilling words that interrupted her house-warming self-pleasure session, ‘Name’s Anne. I haunt this place.’ The pushy apparition wanted the big O in death she’d been denied in life, and she needed a living woman – Kathy – to possess, to experience the kind of manmade orgasm she’d saved up for her entire short, previous life. 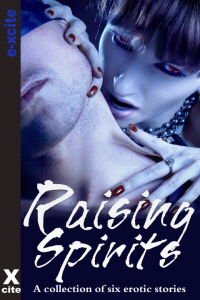 Amy woke to insubstantial fingers trailing over her naked body. She lay motionless, caught between vague terror and lassitude, as the feather-light touch traced the mounds of her breasts, playing with nipples that didn’t share her body’s lethargy. Running over her belly, the fingers sent a shiver through her as they caressed her inner thighs, working their way to her damp pussy and her clit that itched delectably.

She should be panicking now. If someone was in bed with her they’d broken into her home, and who knew what they intended? Somehow, though, Amy couldn’t summon the interest to be scared. The experience was like a dream and she accepted the fingers arousing her.

The fingers left her nipples, and a mouth, just as insubstantial, sucked one of the stiff, itching nubs. A vague tongue-tip flicked over it.

Both hands were playing with her crotch now. A finger and thumb squeezed her clit, sending electric shudders through her, while another finger insinuated into her quim, already wet and ready. In other circumstance, Amy would have been writhing and moaning by now, but the lassitude held her still.

Without warning the finger probing her pussy was replaced by a cock, long and straight but just as insubstantial. Instead of a solid shaft pounding her, Amy only felt a delicious friction on the soaking, stretched walls of her quim. The mouth sucked and bit gently on her nipples, one after the other, drawing some of the surrounding mound inside and the finger and thumb tweaked and teased her throbbing clit.

Fire spread from Amy’s clit, sweeping through her body. Waves of ecstasy shuddered in her pussy, sweeping her up into the heights of climax. She screamed and thrashed inwardly, though the strange lethargy still held her.

Amy sat bolt upright, sweating and gasping as the orgasm died away. It took three attempts before she connected with the switch and light filled the bedroom. She was alone.

She climbed off the bed and stood, shaking and staring around at the cavernous room with its oak panelling and heavy curtains across both windows. The night air was chilly against her damp, heated skin, but it felt good. She didn’t reach for her dressing gown.

It must have been a dream, surely – but what a dream! Though it wasn’t the first time in her 24 years that she’d come in her sleep, she’d never known anything remotely like that before. Was she really so frustrated?

Amy walked unsteadily into the bathroom and splashed some cold water on her face. The icy touch cleared her head but didn’t dispel the sensation of strangeness. She stood with her hands resting on the basin, gazing abstractedly at herself in the mirror and idly watching the sweat trickle between her breasts, until she stiffened at what caught her eye.

Although they were very faint, tooth marks showed around her nipples.

Amy had always wondered whether the house was haunted. She hadn’t for a moment believed it – ghosts weren’t real, after all – but the place had a strange feeling: not threatening, but otherworldly. She’d even mentioned it to an acquaintance in one of the other flats, laughing to show she wasn’t serious, but the woman had shrugged, saying she’d noticed nothing except a large Georgian town house that creaked and settled at night.

Even so, she liked the place, with all its draughts and inexplicable noises. In the last place she’d lived, she’d been very aware of being alone, but this house extended an indefinable sense of welcome whenever she walked through the door.

Amy spent the day following her visitation in a daze. She’d slept little afterwards, in spite of her glorious post-orgasmic exhaustion, and everything came through the woollen muffle of sleeplessness. Her supervisor picked her up for several errors in her work, and eventually, midway through the afternoon, Amy pleaded sickness and left early.

She walked for a while trying to clear her head instead of going straight home. Reason told her she’d had a vivid dream and the marks were a sign of autosuggestion but at a deeper level she knew the experience was real. Although the thought terrified her, the itching of her nipples and clit and the fluttering in her belly anticipated a repeat performance.

Amy spent a while examining herself in her full-length mirror. The bite-marks had faded to nothing, but the long, pink nipples on her pointed breasts stood erect in anticipation of that unknown mouth, and the red-gold curls that downed her mons glistened with moisture.

The idea of the arousal she might be provoking sent a delightful shiver through Amy and she moved her hands over her breasts, mimicking the half-there fingers from last night. Her faint touch tickled soft flesh before teasing and flicking her stiff nipples, imagining her fingers were unseen tongues.

Amy’s quim, wet and open, demanded attention and her engorged clit throbbed with an insistent itch. Sweat trickled down the valley between her breasts, and her trembling thighs were growing sticky.

Stumbling to the bed, Amy flung herself down on her back, raising and spreading her knees – was it to give herself access or invite her lover to fuck her senseless? Continuing to stimulate her nipples with her left hand, she pushed her right down to her crotch. Usually she liked to play around her inner thighs and up over her mons, circling nearer as she grew aroused, but she was too far gone for that. Parting the slippery lips, she plunged two fingers straight into her soaking pussy.

She squealed at the sudden forced entry, stretching her hole as last night’s cock had stretched it. For a few moments she left her fingers embedded to the hilt, savouring the feel, before making three or four slow strokes. Pulling the fingers out, she added a third, wincing at the obscene sensation of fullness.