Rational Universalism, The Second Directive: A New View of Life After Death and Our Spiritual Evolution

Where has science and faith gone wrong? What has brought us to religious and scientific conflict? Why has one faith or another taken on the role of fanatically converting the earth’s population and at what expense? When we die, what can we expect from a scientific view as opposed to a faith-based view of eternity? Can the two be reconciled? What are our spiritual responsibilities, as we evolve individually and as a species?
These are humongous questions which are addressed in a very word-economic way. Cutting to the chase, through eons, we will explore man’s growth from the cave to the Ritz Carlton. Barry Wachs, Ph.D. attempts to lay a sound foundation for an entirely new paradigm for life after death. A paradigm that will not destroy or alter your faith or the way you worship or connect to God or a higher power, but rather give you a sound science-based theory that will support your doctrines and beliefs as long as they do no harm to others. A paradigm that can guide you to a new understanding of eternity.

About the Author:
Over the years, like any good psychologist, Barry Wachs, Ph.D. has explored many theories and approaches to the behaviors of man, including the work of Jung, Pearls, Parkinson, and Neurolinguistic programming. He is a certified Clinical hypnotherapist, and attributes much of his insight to the work of David Quiggly. He was licensed in Arizona for over 20 years as a naturopathic physician. His curiosity has taken him far beyond his birth into Judaism, and he has studied numerous religions and beliefs, and has delved into behavior of hundreds of patients over the years.
Barry’s other work includes 14 years as a Vocational Rehabilitation Counselor and a therapist in a major acute mental/psychiatric hospital. He presently practices as a holistic, alternative health practitioner in Citrus Heights, California and is listed in Who’s Who in California. 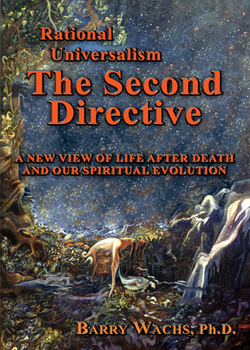 Rational Universalism, The Second Directive: A New View of Life After Death and Our Spiritual Evolution