On Katherine Percy's wedding day, she realizes she has been living the safe life dictated by her parents and the expectations of everyone around her. But the perfection they worship is all a lie, believed by all in exchange for the safe comforts of money. Katherine realizes the tradeoff is more than she is willing to give for that sense of safety.

Is safety really all that important?

Katherine leaves her life behind, becoming Kat Percy, a woman dedicated to living a life unconscious of societies dictating safe ways. She goes to the ultimate city of unsafe living, Las Vegas, and pursues her new life dedicated to giving herself exactly what she wants. What she wants is Patrick Snow. She finds more there than she ever bargained for, the ultimate unsafe pursuit, love. 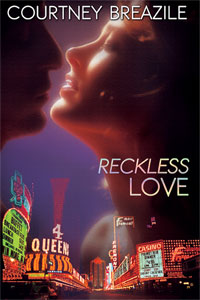 Kat quickly scanned her surroundings and focused on the first thing that looked slightly risky and fun. "Let's do that." Kat pointed down a dark alley at a neon sign flashing Nig Club, the letters h and t were burnt out, making it look a little foreboding. It just added to her desire to go. The atmosphere around the door was menacing and definitely no place Katherine Percy would ever go. Therefore, it was the perfect place for Kat Percy to go and relieve some of her urge to be alive and unsafe.

"Are you sure? If you want to dance, we can find a more…pleasant establishment." Patrick looked uncomfortable and unsure. "Oh, I'm sure, let's go." Kat tugged playfully on Patrick's hand. "Or if you don't want to, I could go by myself. If you wanted to get home and go to bed or something, don't let me keep you up." Kat flashed him a playful smile and dropped his hand, although she fully intended to go into that club with or without him, she had no doubt he would follow her.

Patrick smiled back and grabbed her hand. "Come on, party girl. Just don't say I didn't warn you."

Kat worried briefly that her white dress was less than nightclub appropriate, but then decided not to care. She was just going to have fun. She was not going to care about what everyone else in there was thinking about her and how they were judging her. That was what a person who was looking for the proper route through life would do. She was looking for the fun route through life and she didn't give a crap what anyone else thought. Well, almost anyone. The one person she cared about was Kevin, and of course that is why she hadn't slept with Patrick, yet. Damn her new brother for keeping her from giving completely over to her new self. She would make up for it in other ways, like striding into this interesting establishment with head held high and a determination to partake in whatever it offered.

Patrick stopped in front of the heavy wooden door, turned quickly and put his hands on Kat's shoulders. "I think that this is more than a nightclub, Katherine. I'm just warning you that you might not like what you see if you go in there. It could be disturbing to your delicate sensibilities." Patrick tried to sound a bit joking, but the sentiment was serious.

If Kat had been in any kind of right mind instead of half-crazed by his tempting body, she might have heeded his warning. As it was, her nerves screamed out for satisfaction and so she wanted a distraction, whatever it happened to be. This nightclub was the closest thing that offered any kind of distraction for her.

"I'm made of stronger stuff than you think, Patrick, and not so innocent either," Kat replied with a flip of her hair and a hand playfully on her hip.

"I see." Patrick smiled wickedly at her and pulled her roughly toward him. His lips crushed down on hers with unrestrained passion.

The flame of desire she'd held constantly lit since she met him, flared to life and she was instantly engulfed in the heat of her own desire. Kat threw herself unthinkingly into the kiss. She leaned into him and snaked her tongue out of her parted lips, caressing his.

Patrick crushed her soft body to his, molding her curves to his hardness. He met her tongue with his own and they mated passionately, clinging to each other, both mindless with need.

Kat's hands stroked up and down Patrick's muscled back, maddened by the thin cotton shirt that kept her from his hot smooth skin. Her nails raked down his back in an effort to tear the offending garment from his body.

Patrick's hands slid down to Kat's buttocks and pulled her even closer against his hard body. Proof that he wanted her as much as she wanted him, Kat's body trembled with this knowledge and her knees weakened as their tongues continued their intimate mating dance. Patrick slid his hands down to her thighs and pulled her legs up around his waist.

Kat clung to his shoulders and hooked her ankles behind his back.

Patrick kissed his way across her cheek and nibbled on her ear. His hands slipped easily beneath her dress, which was hiked up to her crotch from the position she was in. His fingers found the lace edge of her panties and traced it down and around to the inside of her thigh. Kat's body arched in anticipation and she threw her head back with a groan of pleasure. Patrick slid his mouth down to her neck, lavishing the delicate skin there with gentle kisses.

"Whoa, check out them going at it like the sky is falling." Patrick kissed his way back up to Kat's ear. "Darling, I think we are being observed."

"I don't care." Kat leaned forward and nipped lightly at his neck.

"Yeah don't mind us, we will just settle in here and watch the show. It's going to be better than anything inside, not to mention free." The two men leaned against the opposite wall, settling in for the show.

Kat unhooked her ankles and slid her body down Patrick's. She smoothed her dress and held her head high. She would not let her actions shame her, but she would continue on the road to not doing it again, if that was possible. She wanted Patrick now more than ever.

"Too bad, come on, Chuck, let's get inside before Millie gets onstage." The two men hurried past and into the door.

"Shall we go?" Patrick asked, meaning someplace more private where they could continue their interaction uninterrupted.

"Yes, let's get inside. Apparently there is some kind of show about to start. I'm sure we don't want to miss it."