Nina Riley's life revolves around serial killers. An avid researcher and lecturer on these predators, she's drawn to a prolific one called the Hunter, who has eluded capture for more than thirty years. When she's not studying murderers and talking about them, Nina enjoys her quiet life in the pretty Northern California town of Abbey Glen.

One night Nina's quiet life changes when her boyfriend, Richard Devlin, shows his violent side. Soon after, a mysterious package filled with shocking surprises shows up on her doorstep. Nina Riley's life has suddenly become mysterious, frightening, and filled with unanswered questions.

What is the secret organization called the Council? Who is the Hunter and does he live in Abbey Glen? What goes on at the Devlin Ranch at the old monastery called Red Abbey?

Nina doesn't know that Abbey Glen is hiding many more secrets and that they are all connected to Red Abbey—and to her.

Until it's too late. 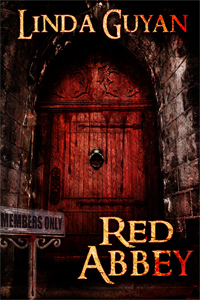 She wondered who the kill would be tonight. Sometimes they brought in an anonymous victim from some other town. Sometimes it was someone they knew from town, usually some troublemaker they wanted to eliminate. The previous caretaker selected the victim. If for some reason she couldn't, the Council barrister selected the victim. The victim didn't matter either way. A stranger or friend, an innocent or an asshole, killing was easy for Cora. She was a Hunter, after all. Murder came naturally. She trained right there in the catacombs under the abbey in what they called the Red Room—quite an apt name. The floor of the training room for Hunters was literally red from all the blood that had flowed during thousands of training classes. It wasn't like they practiced on dummies. The floor and brick walls were soaked with blood. Everything about Red Abbey has some reference to blood—whether it be from the flow of it from victims or our bloodlines that connect us. Red Abbey is a symbol of what and who we are.

Cora trudged ahead, keeping her gaze on the woman ahead of her. She wore a navy blue dress and matching shoes. That was all she could see because of her navy blue coat that covered everything in between. Navy blue was obviously the woman's favorite color.

Okay, I'm a little nervous. It isn't like I haven't killed before. I'm not nervous about that. I'm nervous about having an audience. You don't have to be a Hunter to be a caretaker. You do have to be a killer and you have to prove it. Therefore, the caretaker initiation ritual.

Finally, they had reached the Ceremonial Room. Cora entered and let out a quiet sigh of relief. The room was large. Compared to the narrow path she had just traveled, this felt like the big open spaces. In the center of the room was a raised platform with a naked man lying in the center. He was obviously drugged, because he wasn't resisting or fighting. She could hear him groaning softly. He was awake enough to know what was happening, but he couldn't move or speak.

As per the ritual, the caretakers stripped Cora of her clothing. They stepped far back against the wall, circling the room as Cora made her way to the center for her initiation. She stepped onto the platform and gazed down at the naked man on the slab.

She recognized him right away.

Titus Harker. Rapist, wife beater, wife cheater, alcoholic. If his pregnant wife, Lorelei, ever knew the truth of what was happening here tonight, she'd send me a thank-you card. Lorelei will think her rotten husband took off on one of his alcoholic binges or shacked up with another girlfriend. The difference this time is that he'll never return.

This is going to be so easy.

She was not allowed to choose her weapon. The caretaker chose it for her. She picked up the ax from the floor.

Cora didn't waste time. She adjusted her stance, gripped the ax and raised it high, gaining purchase. Quickly and efficiently she brought it down on Titus Harker's neck, separating his head from his body. Blood sprayed over her like a sprinkler as the man's head fell to the ground at her feet. She turned to look at the caretakers as she dropped the bloody weapon on the floor. Cora breathed heavily as she swiped blood from her face with the back of her hand. Seeing clearly now, she noticed the caretakers were smiling, albeit imperceptibly. She knew she had done well, but this silent praise from her peers filled her with pride. More than their praise, the thrill of the kill always exhilarated her.

Decapitation isn't my usual kill method, though I'd forgotten how good it feels. I might have to do this more often.