He put his arms around me and I felt his cock, hard against my thigh as I felt myself relax in his embrace. I was aware that all had now gone quiet and, after a while, the god broke away from me, looked around and laughed. It was as though his laugh was some kind of signal. The satyrs threw back their heads and let out a strange, sexually charged laugh which had a low, rhythmic purr and added to the sexual frisson. I was now caught up in the atmosphere and found myself smiling and laughing, carefree and filled with sexual desire.
Several satyrs came over to the stone table, their cocks swaying above me. The god knelt down on the table beside me, took me in his arms again and kissed me, his tongue filling my mouth, his hands caressing my neck and shoulders and moving over my breasts. He put a hand between my legs and gently eased my thighs apart. I followed his lead and spread my thighs wider, expecting to feel his fingers inside me. My eyes were still closed as I concentrated on his tongue which was still exploring my mouth. It wasn’t his fingers but the head of a satyr I felt between my legs, his shaggy hair caressing the soft insides of my thighs and his excited breath warming my pussy. Then, a practiced tongue lapped at my pussy, sending pulses of pleasure through me. I opened my eyes and watched as the sneering face gorged on me. Again, the god broke away, looked down and laughed as the satyrs, like pigs at a trough, nudged each other aside. I felt no fear, only desire and I lay back in his arms, smiling as the satyrs feasted on my pussy. Their tongues, experienced and lustful, sent me into a dizzy joy as waves of pleasure coursed through me. The satyrs took turns to taste me and trotted around, whooping with joy, as though the juice from my pussy was some rare, vintage wine. I looked dreamily around me and took in what was now a full blown orgy. Shaggy satyr haunches pumped away as they took the maenads on their backs and from behind. Some of the maenads were fiercely riding satyrs and the early evening air was filled with grunts and cries of pleasure. 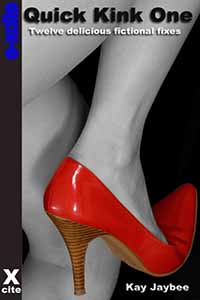 Quick Kink - One
Kay Jaybee
In Shelf
$4.99
Tweets by
sirenbookstrand