After eighteen years as a practitioner and teacher of Reiki, Sister Eileen has been astonished by the sheer number of people who have continued to stream through the door. People of all ages and traditions have come seeking their healing and finding it as Eileen did when she first embarked on this foreign road that soon became home to her. Eileen has come to recognize through her many years of practice that there is an inherent healing power within each of us and that the gift of Reiki is able to activate it.

In her manual, Eileen brings with her a core community of Reiki practitioners and teachers from different traditions and backgrounds that journey alongside her and recognize, as she does, the simplicity, wonder and beauty of God’s universal gift for our time. The healing stories are too numerous to count but she does include specific testimonials within her manual that speak for the thousands of others who have been healed through the doorway of Reiki. In this way, Eileen’s Advanced and Master Level Training Manual, becomes a living testimony as she thoroughly covers all the information required to be a successful and competent Reiki practitioner and teacher.

Written with inspiration and clarity, Eileen takes the reader on an amazing journey into the dynamic world of the inner self. Like a fresh current of air, she presents her material in an appealing and easily digestible manner. The uniqueness of Eileen’s Reiki training manual lies in her ability to weave the Christ conscious healing dimension into it just as an alchemist would when producing gold. In this way, Eileen shows how the revered eastern practice of Reiki discovered by Dr. Mikao Usui, a Japanese Buddhist, in the early 20th century can blend perfectly with a Christian heritage of healing where the one enhances the other. At the same time, she shows how this simple, profound method of hands-on healing transcends cultural and religious boundaries in a way that makes this universal gift of Life Force Energy accessible to anyone.

Often people who encounter Reiki for the first time experience an inner bliss and harmony which leads them to explore the gift more fully. Others go away from the treatment or training feeling restored, refreshed and renewed. Reiki, the universal Life Force Energy of God, is not a new invention or modern day fad. Its roots are planted deep in ancient history. In the Old Testament, Life Force Energy was spoken about eloquently and has been pulsating through the whole of creation from the beginning of time. Even science and the world of medicine are looking at this complementary form of healing called “Reiki” with fresh new eyes. Its worldwide impact can no longer go unnoticed.

About the Author:
Eileen Curteis, a Sister of Saint Ann, is a Reiki Master teacher and practitioner, who has taught and treated thousands of people over the last eighteen years at Queenswood, a former retreat and spirituality centre in Victoria, BC. Preceding this, Eileen was a teacher, principal and educator for twenty-seven years. Her greatest passion lies in her healing ministry and in the literary arts. She has authored eleven books to date and through the years has become an accomplished poet, artist, writer, as well as being a producer of six CDs and three films. 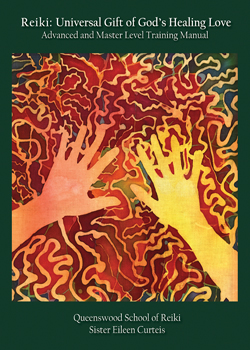