Get ready for another collection of stories on relationships from master storyteller, Piers Anthony.

From one of the best known names in fiction comes this fourth unique collection of stories about relationships--some intense, some sexual, some mild, some shockers.

This collection is intended for mature, thoughtful readers who care more about character and idea than adventure. A must for Anthony fans. Warning: This work contains one scene of non-consensual sex. 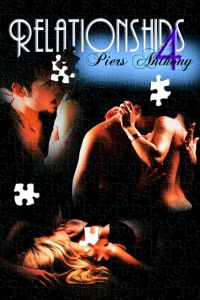 Edna waited politely until the other customers cleared. Then she braced the handsome young clerk of the hardware store. “There was a mistake,” she said. “You undercharged me for this trowel. Here is my receipt.”

The man nodded. “If we overcharged you, we’ll naturally give you a refund.” She noticed that his nameplate said ERLE.

“Undercharged,” she repeated. “See, the price sticker is here. The receipt is a dollar low. I didn’t notice until I checked at home. So I came right back.” She dug a dollar out of her purse.

Erle was amazed. “You are complaining about an undercharge?”

“Not complaining. Merely rectifying. You have to make a living too, don’t you?”

He shook his head. “We seldom encounter this kind of honesty. Keep the dollar; consider it a special sale.”

“No, no. I would have complained as readily if the receipt had been a dollar high. Take the money. I would not want you to get in trouble with your employer.”

Erle looked around. The store was empty for the time being. “May we talk for a moment? Do you have time?”

“More than I like,” she said with a wan smile. She did not clarify that her life was a private annoyance not even approaching the level of hell. Merely the frustration of being denied anything she might ever have wished for. Time? Time for what? She had no destiny. She was a wasted life, useless.

“I will not get in trouble with my boss. I am the owner of this franchise. I inherited the hardware chain when my parents died unexpectedly two years ago. Keep the dollar; I appreciate your honesty more than I need the money.”

She considered him more carefully. He was not only handsome, he was husky. He probably worked out regularly. “You’re the owner? Then why are you clerking?”

“Learning the business from the ground up. Making myself useful. I really don’t know what to do with my sudden wealth, and don’t want to make any foolish mistakes.”

“I am impressed, Erle. I believe I have seen you these past two years, without noticing.”

“And I have seen you, shopping for garden tools, mostly.”

“So we know each other, in a manner,” she agreed. “I am Edna, desultory fifty-year-old housewife.”

“So be at ease about the trowel,” he said.

“I must compliment you on your attitude. Most wealthy young men would be going for cars, girls, and parties.”

“Not me. I have delusions of amounting to something.”

“No parties? Not even occasionally? Girls are attracted to money. You could surely splurge with a limited dalliance or two.” She paused. “Unless—”

“I’m not gay,” he said. “But also not dating. Girls paid me little attention, until I got rich; now they are all after me, but I don’t trust any of them.”

“I see the problem. Maybe you could date anonymously on the internet, until you are sure one is interested in you for yourself alone.”

“I don’t trust that either. She’d Google me and know, and maybe only pretend not to care about the money.”

“Then it seems I have no answer for you,” she said. “It’s not the kind of problem I ever faced, not having money or beauty. I live economy style throughout.”

“About that, we have sales every so often, with some real bargains. There’ll be one next week. Call to see whether there’s anything you want.”

“No need to take the trouble; there might not be anything for you.”

Edna braced herself and said it. “I wasn’t questioning the merit of your sale. It’s that I can’t call.”

He stared at her. “You have a fear of phoning?”

“I really do, weird as that may seem. Had it all my life. My husband makes the calls. I’m helpless in that respect.”

“I wasn’t questioning your word. I just couldn’t believe that anyone else suffered that particular malady.”

“Too embarrassed,” he agreed. “It messes me up at the store, too. Our accountant has to handle any outbound calls. I know how badly it limits me, but until I get over it, I’m helpless.”

“And you can’t just get over it,” she said. “I truly understand.”

She laughed. “Well, we don’t call each other about it.”

“Please, I would like to know more about you. I never met someone who shared that particular problem.”

“I’m just an old woman trapped in an ugly marriage with nothing to look forward to. Nothing of interest, really.”

“Ugly marriage? It’s not my business, but—”

“He’s got a mistress or two on the side. When I challenged him about it, he said what was I going to do, divorce him? He knows I’m stuck. He has the money and the control. I am in effect a household servant, cooking, cleaning, whatever he wants. So I make the best of it, gardening and so on. I’d be utterly helpless on my own. Because of the phone.”

“Because of the phone,” he agreed. “Edna, I wish I could help you, but I can’t even help myself. Let me take you out to eat, or something.”

“I wasn’t asking you for anything,” she said, more sharply than she had intended. “You told me your situation, so I told you mine. That’s all there is to it.”

“But I don’t want that to be all,” he protested. “I want to keep company with you, because you’re the first person I’ve felt remotely comfortable with in a long time. Because of the phobia. If you could use money—”

“No money,” she said sharply. “I shouldn’t have spoken.”

“I understand how you don’t want anything from me. I respect that. You even came to return the dollar, though you could use it yourself. Please, what can I do for you?”

She laughed bitterly. “Have an affair with me.”

He laughed, and she laughed with him. Then they paused.

Then he spoke carefully. “I am not presuming anything. Just saying that I’m interested. Because I really would like to be with an understanding woman.” He blushed. “Sex—I dream of it constantly. So it’s not completely a joke to me.”

“You can’t be serious. I mean, about me. I’m old and saggy, and look worse naked. You can’t really be turned on by me.”

“Ma’am, I’m turned on already. It’s the phone that connects us; the rest is incidental. I got a ...” He turned sideways, embarrassed, and she saw the bulge in his pants.

“I’ll be damned,” she murmured. “I haven’t had that effect on a man in twenty years.”

“Except your husband, of course.”

“Except nothing. He has no sexual use for me. That drives me crazy, because I am a woman who really likes sex. Any kind, any time.”

He considered briefly. “The store closes at 5 PM. I have an apartment in back. So if it’s not a joke, and you have time...” He shrugged.

“I’ll be there,” she said, surprised by the quickness of her decision. Was she simply calling his bluff?

She showed up promptly at five. He conducted her to his small but well furnished apartment. “You haven’t changed your mind? Because we can just talk if you prefer.”

She removed her clothing, revealing her unappealing body. “If this doesn’t change yours, let’s get to it. I’m no sweet innocent young thing.”

“I’m the innocent one,” he said, stripping similarly. He had a fine body and an enormous erection, the kind she had dreamed about. “I think you look sexy as hell. What do we do now?”

“You haven’t had sex before?”

“I’m a virgin,” he admitted. “I have a huge desire, but don’t want to make a wrong move and ruin it.”

“Then come here,” she said, drawing him down on the bed with her.

“Not where it counts.” She made him lie on his back. Then she mounted him, set his turgid member to her cleft, settled onto him and stretched her body out against him. “Now thrust,” she said.

He did, and in moments she felt him spurting. She had not had so large and hard a member in her before, and the feel and audacity of the experience so excited her that soon she joined him in climax, kissing him avidly throughout. He truly wanted her! That thrilled her.

Then they lay beside each other, relaxing.

“That was wonderful,” he said. “Thank you, Edna, for a glorious experience.”

“Same here,” she said. “It’s magical to be truly desired, especially at my age.”

“Oh, yes, I desire you,” he said. “Maybe it’s because you’re the only woman I really trust, despite our brief acquaintanceship. I know you’re not trying to get anything from me.”

“I’m getting that from you. What will you tell your husband?”

“The truth. He’ll never believe it. How I had one superlative outing with a rich, handsome, young man who plumbed me better than I’ve had in twenty years.”

“If you keep talking like that, you’re going to get me wanting more.” Indeed, his member was thickening. He was young; he recovered quickly.

“You can have all you want. I am quite thrilled to be wanted.”

“I know what you mean. Every day, if you want. Until you tire of me. I do so like having this effect.”

“It may take years for me to tire of you. You truly understand and accept me.”

“We understand and accept each other. At least in one or two respects. We are totally different creatures, but we have a common need.”

“I don’t think I’ll ever mind being so ardently desired. I have been hopelessly hungering for that for decades. Do with me what you wish.”

He half mounted her and put his face to her breasts, hesitantly. He had had little, if any, experience, and needed reassurance and encouragement. She took hold of his head and guided his mouth to her nipples. Soon he was licking and sucking on them. That started working her up again, too.

Before long he was penetrating her again, working up to a slower, longer climax. She did not climax with him this time, but that hardly diminished her enjoyment of the experience. To have such a handsome, husky young man craving her as a sex object! How could she ever get enough of that?