Lin-Manuel Miranda created the Broadway hit-musical of the decade in Hamilton. His earlier production In The Heights set theater audiences dancing to a hip hop/ Latin beat. And if you have children or are a child at heart, you know all about the music of Moana. But there’s a lot you don’t know about this pop culture genius.

Miranda’s story is the classic American Dream on full display. The son of Puerto Rican immigrants, Miranda’s life-long obsession with music, theater and the possibilities of creating for The Great White Way drove him through the ups and downs of the highly competitive world of Broadway and, through sheer drive, determination and an abundance of creative talent has made his way to the top of the entertainment world.

Through extensive research in a number of widely divergent sources, Shapiro has pieced together the life and times of Lin-Manuel Miranda, replete with all the large and small moments that comprise the character of a literal creative renaissance man, composer, actor, culturally and socially savvy and multi-Tony-Award and Pulitzer Prize-winning giant of the Broadway stage whose future is only limited by his imagination which is always on the go and creating worlds to come

Renaissance Man: The Lin Manuel Miranda Story is a blueprint for success, an inspirational guide to following one’s dreams and, perhaps most important, the answer to the question of what following your dreams can bring. 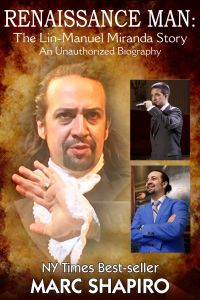 For Lin Manuel Miranda, the not too subtle turn of phrase uttered in The Guardian was more than mere explanation or the obvious footnote to a job well done. For the creator and star of Hamilton, it was trademark Miranda, equal parts youthful triumph and the verbal equivalent of winning a gold medal and crossing the finish line. Hamilton had made both Miranda’s career and his legacy as a driving force in theater.

“I was ready,” he acknowledged in a conversation with Gentleman’s Quarterly. “My kid (a boy named Sebastian was born two weeks before rehearsals for Hamilton started. By the time I finished up with Hamilton he was starting to speak in complete sentences. I leave Hamilton very tired and self- fulfilled. But I also have enough stuff going on in real life that I don’t need Hamilton to be the rest of my life.”

But as he contemplates life post Hamilton, Miranda is nothing if not humbled by his rags to riches rise and ultimately philosophical about the past and the future. “I went from being a broke substitute teacher to a Broadway composer,” he said in an interview with National Public Radio as the enormity of his life’s journey to that point and what the future would most certainly bring was beginning to sink in.

“I will never make a leap that big in my life again.”